METZ at the First Unitarian Church of Philadelphia — 1.12.16

Philadelphia's first snow of the season interestingly coincided with the evening's METZ gig at the First Unitarian Church Tuesday night, some chilling wind and flakes whipping viciously through the handful of cold individuals huddled outside the basement's stairway. Some concertgoers had voluntarily arrived without coats, anticipating the eventual warmth that would ensue once the amps were plugged in and the inevitable movement of the all-ages crowd began emitting heat, so their endurance was certainly put to the test. We filed into the venue once the doors were opened. Everyone found their spots on the floor and began ceremonially cracking open cans of PBR.

The hall went black save for the backlit glow of blue light that cut silhouettes of the members of So Pitted, an abstract punk trio whose direct sonic assaults somehow aligned with their moments of noise-laden oddity. Watching So Pitted, I at times pictured DEVO’s Mark Mothersbaugh channeling an early demo of Nirvana’s “Endless Nameless.” Other times, there were hints of Pixies' quietLOUDquiet transitions met with the maddening guitar scrubbing of DNA’s Arto Lindsay. While the band seemed to fumble a bit through instrument exchanges, had to patch up a broken guitar string, and also went through the trouble of an unnecessary wardrobe change, they were a lot of fun to watch. So Pitted played an energized set, an almost industrially clean drum sound and some deafening fuzz tone carrying their abrasive guitar phrasing. I’d intended on purchasing some music from the band’s merch table, but they’re unfortunately touring a month or so ahead of the release of their debut, (neo, available through Sub Pop on February 19th). 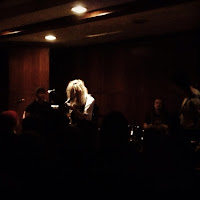 Following So Pitted’s punk art was Bully, who were as straight-ahead as rock n’ roll gets. Standing at the microphone, her face obscured by an unruly mess of blonde hair, Bully singer/guitarist Alicia Bognanno has a lot of presence onstage, her voice shrouded in just enough rasp to roughen up the band's otherwise pop lean. While there’s enough melody injected into Bully’s sound to pull them into the dangerous realm of “safe” and/or “accessible” in this era of post-Nirvana appreciation/emulation that we’re all currently experiencing, Bognanno’s approach to songwriting has value beyond Alt-90s pastiche. “This is a really cool church,” she noted between songs, pulling her guitar back in tune as a gentle waft of appreciative laughs were sent her way. Their set was solid.

Before METZ hit the stage, Bognanno, with a charming sense of self-deprecation, admitted that METZ was “better than us.” While I won’t completely agree with that assessment, I do firmly believe that METZ should be held up by every rock band as the live act to either measure up to or beat. If you can’t do either, you should just quit.

When I first saw METZ in 2013, I remember being very offended by a member of that evening's crowd who yelled at METZ vocalist/guitarist Alex Edkins to “Chill out!” The idea that a member of any rock audience would respond negatively to a band that was delivering such a strong performance was insane to me, and I went so far as to attribute this reaction to an overall problem with younger generations who maybe weren’t used to bands pushing themselves to that level. But, that was silly. METZ continues to be an intense live act and the crowd responded to every song appropriately: with lots of movement and enthusiasm. In fact, the crowd was so animated at points that Edkins asked that they not hurt each other. 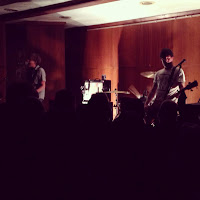 Although the ceiling fans were on full blast, the air was all decibels and heat. Pulling most of their setlist from the band’s latest release, 2015’s II, METZ were the sonic equivalent of a steamroller, an overwhelming barrage of speed and sound that rattled my frame. And though I’d expected most of what I’d witnessed, as the band hasn’t changed a bit since last time I saw them play, it was still refreshing to be reminded of their dedication to performance. They don’t fuck around.

My personal highlight was seeing them play “Spit You Out,” which is one of my favorite songs from II. The rhythmic bounce of that track, which times perfectly with a relative “drop” section, is absolutely inspired and garnered an impressive response from the audience. Another great moment was their performance of “Eraser,” which is a new single the band released via Three One Gee. (I managed to get a copy at the gig.)

By the end of their set, METZ were understandably beat. People began vacating the stage area and started amassing at the merch tables, rolled tshirts, LPs, and posters leaving the venue as the chilly outside air began to pervade the hall. As always, crushed cans, empty paper bags and small pools of beer littered the floor. With a shirt and 7” under my arm, I welcomed the cold air as I ascended the stairs, happy the snow had stopped.