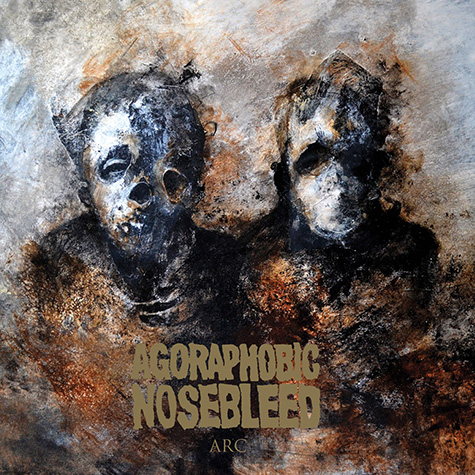 Agoraphobic Nosebleed's very complete, very ambitious new EP, Arc, is the first of four EPs slated to be issued by the band, each release being informed stylistically by the individual tastes of each of ANb's members.  Introducing this concept, Arc is 28-minutes and three tracks replete with expert misery and dynamic aggression.  Once immersed in the almost stoner-laced phrasing of "Not a Daughter,” some appreciative nods aimed toward Eyehategod added here as well, it becomes clear how heavily influences affect ANb's sound.  And, since that’s the idea, there’s room to appreciate Arc as an homage, or at least a worthwhile interpretation of the styles it aims to address.

The sludge mastery of “Deathbed,” screaming utterances from vocalist Kat Katz ripping through the track’s initial crawl, transitions into truly sweet Iommi-sized guitar phrases that carry the track to a close, jamming out a desert rock payoff.  It’s probably the most uplifting couple minutes on the release and it slowly transitions into “Gnaw,” which is an almost 12-minute slow cooker revolving around mental illness and depression.  Crafted as more of a suite, you get the sense that ANb struggle to keep the song’s pace at a drag, which inadvertently adds to its tension.  The recorded testimony incorporated into the overall design is effective without being obvious to the songs’s intent, used instead to aid the song’s transitions.  By Arc’s end, it’s apparent how dense this album is in spite of its three-song length.  It’ll be interesting to hear how this collection comes together and the varying styles the band explores.