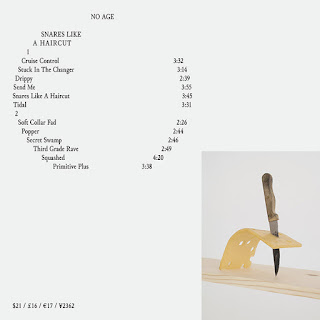 Myself currently employed at a corporate entity, I've certainly been exposed to and/or required to attend the sort of soul-sucking meetings addressed in the latest No Age video for the song, "Send Me."  I will say, though, I haven't had to be taught how to use a stapler, so this video certainly depicts a level of day job hell I've yet to experience.

As far as the song, "Send Me" is the type of glossy, lo-fidelity track No Age is known to produce, jangly riffs and a quivering tonal backdrop that deepens the duo's sound.  This song is featured in the band's Drag City debut, Snares Like A Haircut, which is releasing January 26th.

Check out the video below.  All info on the release was provided by mutante-inc.

No Age Save The People

Looking for an escape from the thundering monotony of the nine-to-five? Sign up for the New No Age, Snares Like A Haircut! The album is classic No Age - well considered from several angles, and handsomely produced to shatter the windshield of your existence - so that you can feel the wind of LIFE in your face for one screaming moment! Snares Like A Haircut rips with drive and haze like a well-oiled machine, condensing raw force into the shape of a pop song with unusual flair. Thanks No Age!

Directed by visual artist and filmmaker Jonn Herschend in collaboration with No Age, the video for "Send Me" features Beth Lisick, representing the ID in the workplace, fleeing from the drone of Randy and Dean as they demonstrate the latest office supplies and the procedures to follow them. Maybe you too are more interested in saying "fuck it" to the 9 to 5 lifestyle? If so, "Send Me" gots your back! Watch the video over on SPIN right now and catch the band at the following dates here in the new no age of 2018.

Snares Like A Haircut is released on 26th January - Drag City