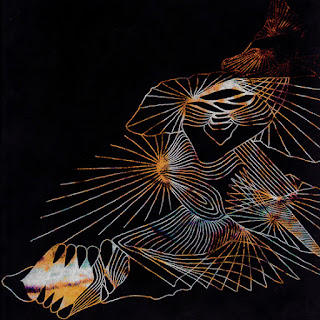 I'm thinking since we have "power violence," we should have "jazz violence" if we don't already. I'm not sure how else to categorize the sounds of GRID, the trio responsible for this "Brutal Kings" track. Groups like Zu, Wolf Eyes, and maybe even Naked City have been cutting numerous, intersecting paths through these territories, injecting chaos into improv with as much dire and affecting aural malice as can be manifested when you deal with erratic composition. GRID ably follow suit here, inflicting some high-caliber low end and percussion upon the listener as heavy blasts of saxophone and grinding racket pierce through the mire. "Brutal Kings" is excellently unsettling and acts as the lead into the group's upcoming new LP, Decomposing Force.

The record is scheduled to release 4/24 via NNA Tapes. Check out the single below. Info on GRID and Decomposing Force was provided by Clandestine Label Services.

You can pre-order the album at NNA Tapes' Bandcamp.

GRID, the experimental trio of Matt Nelson (Battle Trance; Elder Ones) on saxophone, Tim Dahl (Child Abuse; Lydia Lunch Retrovirus) on bass, and Nick Podgurski (New Firmament; Feast of the Epiphany) on drums, have returned to NNA Tapes for the release of their colossal sophomore album, Decomposing Force.

Recorded live in one room with no overdubs and mixed to 1/2 inch tape, GRID builds off of their earth-rattling self-titled debut. Decomposing Force relies on the composite sound of Nelson, Dahl, and Podgurski interacting and reacting to each individual as well as their combined output—the continual flowing-in of individual and agglomeration serves to add dimension to the blackness and possibility of GRID’s musical ecosystem. With Dahl’s bass-amp angled directly into the microphone Nelson uses for his saxophone, the improvisational sounds of the entire band are fed through Nelson’s pedals and monitor to create a continuously interactive and variable feedback loop that comes to define the visceral immensity of GRID’s soundscapes. This combines with a mutual willingness to evenly shoulder the weight of composition. There is no showcasing of any single player in this amorphous system. The impact of what is created shall be carried by all.

Remaining beyond strict categorization, GRID’s crushing dissonance is an amalgamation of each member’s background in free-jazz and improvisational music, as well as Doom-Metal, Noise, and Ambient influences. The resistance towards classification and familiarity leaves listeners in an environment negotiable only by feel. Musically synthesizing and re-synthesizing in each moment, GRID’s cyclical transmission of sound and energy continually develops expressive, hyperactive, protean textures that brutally and masterfully navigate through the dense, heavy atmosphere of Decomposing Force with vigorous dynamism.

“Brutal Kings” is a short, claustrophobic passageway of bristles and thorns—each instrument and each note are distinctly and singularly piercing. The cacophonous “Nythynge” violently builds and releases tension as the band moves through passages of imposing, jagged musical discourse. The playing loosens and the tempo slows to an enveloping trudge on the thick, sludgy “The Weight of Literacy.” Then “Cold Seep” closes the album in a chilled, unsettling ambiance more expansive than anything that precedes it, leaving the impression that you’ve only explored but one tiny corner of GRID’s world.

Built on the tenets of weight, difficulty, challenge, collaboration, and adaptability, GRID constructs and confronts the oppressive dark—not with transcendent opposition but with an embrace, diving deeper in as a way through. Decomposing Force is sonic catharsis of the highest and harshest caliber.