Notes from the Record Room (Quarantine Edition #1): “To You, I’m Nothing But A Number…One! Two! Three! Repeater!” 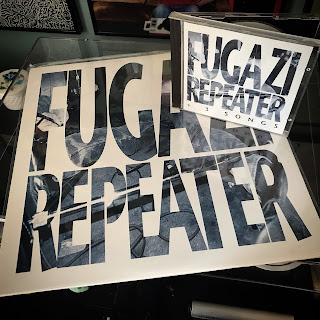 Indie or punk records pressed to vinyl were almost always guaranteed to fit onto a single side of a 90-minute cassette. I couldn’t tell you who lent it to me, but I had access to a cassette copy of Fugazi’s Repeater and dubbed it easily onto the A-side of a blank tape, (the B-side would later be used to fit a copy of Death’s Individual Thought Patterns, a weird “any port in a storm” decision). I didn’t properly own this record (or really even give it a full, undivided listen) until a little while later, after In On The Kill Taker sold me on the genius of this band. After that, I was all in and listening nonstop.

CDs seemed to starve for content, the 70-minutes of allowable space enabling an excess of additional tracks at points. If you purchased CDs in the 1990s, how many of them were overlong and packed full of songs, or featured that “hidden track”? And, if they weren’t, how many music-buyers out there felt ripped off? Surely you weren’t all that thrilled to pay the asked for $17.99 for a 30-minute record. For the short while that a CD store resided in my hometown, I was able to pick up quite a few things at a relatively affordable cost, one of those things being the Repeater + 3 Songs compilation CD. Recognizing the opportunity to bunch up releases, the group’s 3 Songs 7” EP was an add-on for this version of the album. I was a part-time employee of a grocery store in those days, so two releases for the price of one was an attractive offer. 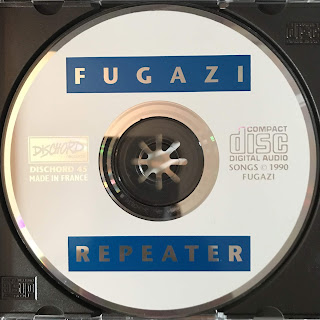 I also snatched up the 13 Songs CD, which compiled the 7 Songs and Margin Walker EPs. Once again: two releases for the price of one.

Repeater was released on April 19th, 1990. THIS is Fugazi’s first official studio LP and remains one of the most necessary pieces of recorded music to have informed an era (any era) in American music despite the fact that it didn’t enjoy airplay on terrestrial radio, have any sort of video promotion on MTV, nor the distribution or commercial push a major label could’ve provided. Fugazi operated in the shadows, remaining highly influential while navigating completely around the apparatus that got hip to Seattle and left-of-the-dial sounds and vision. For all the talk of authenticity I remember being had in those days, Fugazi could really boast that shit.

This is all well documented, though, so allow me my moment to be self-indulgent.

I approach this record now as a 43-year old realizing that Repeater probably did more to define my generation than Nirvana’s Nevermind. The crass misuse of the word “alternative,” an unimaginative catch-all descriptor used to neatly package and commodify what had once been an actual scene built for and by those uninterested in what they were being fed by the multiplexes and the airwaves, wasn’t apparent at the time to those of us who just didn’t know. Speaking for myself, I was excited by what I was hearing back then. The sounds made sense. And, yes, Nevermind opened many doors.

But, there’s a cost to mass appeal, its heaviest casualties being Kurt Cobain himself and the ethos of independent music. Fugazi were the pure culmination of that ethos, a spirit that fashioned its own creative persona which was channeled through an intelligent directness and carried by a newly evolved iteration of hardcore. “But we don’t have to try it!” shouts Ian MacKaye in the title track. “And, we don’t have to buy it!” These two stanzas explain everything and this message was relayed a year before “Smells Like Teen Spirit” removed hair metal and Hammer pants from the teenage consciousness. There are choices. Alternatives. As far as I’m concerned, this was the only instance when that term could’ve truly represented an actual thought rebellion. 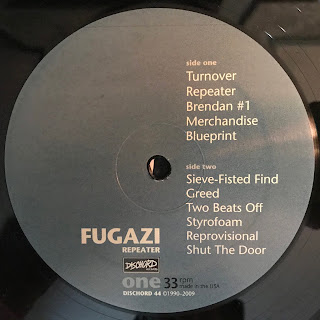 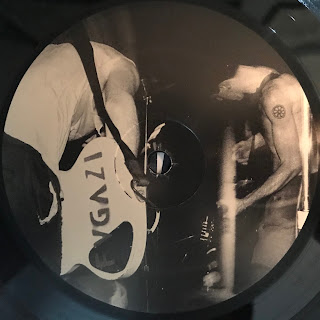 Repeater is a heavy record with messages to distill and absorb. In fact, you could call this album a mission statement set to music. And while those messages remain essential to the band’s identity, a group philosophy that outlines their lack of interest in catering to commercialized trends and industries that tend to promote self-destructive behavior, this is a band that also crafted its own musical dialect. I had the pleasure of speaking to Ian MacKaye a number of years ago for an interview and I asked him how he felt about Fugazi’s music often taking a backseat to their philosophies.

Transcribed from that interview:

“I understand how this assertive attention to detail on our part, or my part, is made to get all the attention,” MacKaye said. “Everything I’ve done — everything Fugazi did — was for the music, because that was the point. That is the point. Does it bother me?”

Again considering the question I asked, MacKaye added, “We worked tirelessly on our music. We practiced four or five times a week — four, five, six hours a day. We REALLY worked on music. We practiced so much and really tried to craft something that was interesting to us and would hopefully reach the other people.

“So, to answer your question: yeah, it bothers me.”

Having integrity is not easy. This was the group, (an all-male group), that had taken responsibility for and challenged the male gaze with the song “Suggestion.” Whether being confrontational or just honest, Fugazi’s perspective has been pretty consistent and that level of consistency and evident lack of concern for how their “politically correct” stance is received will inspire vitriol.

But those sounds. And those words.

Having successfully fused hardcore’s urgency with a funk-laden rhythm section and dynamic guitar work, co-singer/guitarist Guy Picciotto (Rites Of Spring, Happy Go Licky, One Last Wish) and MacKaye exude raw symbiosis. There’s no lack of intricacy or melody, distortion or sharp turns. The first three tracks are almost a medley, the powerful “Turnover” collapsing into a full-throttle drum break that introduces the funk-laden and acute dissonance of “Repeater,” which then seamlessly transitions into the thunderous percussive rally of “Brendan #1.”

The even strum of “Merchadise” breaks this up, an aggro lift as MacKaye states, “We owe you nothing! You have no control!” “Blueprint” follows the protest, a dramatic and singularly perfect musical highpoint. Picciotto sings, “What a difference a little difference could make.” It’s one of my favorite lyrics in any song.

For “Sieve-Fisted Find,” Brendan Canty and Joe Lally rumble in unison, a drum and bass combo that quakes as Picciotto sings, “Here comes another problem/All wrapped up in solution.” “Greed” is as direct as this album gets, the one instance where a level of lyrical economy and repetition almost tap into D.C.’s hardcore legacy. And “Two Beats Off” works through its musical points while locked into a patient groove, rarely straying aside from the outro.

I’ve always loved how the band introduces “Styrofoam,” a signature guitar lick (Fugazi somehow owns motifs like these) running through a few cycles before Canty nails the snare and the melodies ascend arc-like. The propulsion is fluid till the hook when MacKaye charges, “We are all bigots/So filled with hatred/We release our poisons!” And then “Reprovisional” is a reboot of a song from the Margin Walker EP called “Provisional.” There’s variation in tone and pacing, plus a noisier bridge.

“Shut The Door” makes an anti-drug statement by dealing in contradiction: “I broke the surface so I can breathe/I close my eyes so I can see/I tie my arms to be free/Have you ever been free?” The song was written about the girlfriend of MacKaye’s brother Alec, Catherine Brayley, who’d passed away from a heroin overdose. This isn’t a rant delivered from a straight-edge soapbox. This isn’t JUST SAY NO. Instead, the personal impact and weight of loss is addressed, the consequences (“She’s not breathing! She’s not moving! She’s not coming back!”) offered testimony in real time.

A significant portion of the early 90s Alt-royalty were either addicted to or erased completely by heroin, and thusly this drug got a lot of press back then. A year before Cobain confessed to getting “so high/I scratched till I bled,” Fugazi dispensed with the tortured poet and/or outsider artist reputation often associated with tapping the vein, that addict mystique that has, in the eyes and perceptions of many, offered talented people entry into a higher creative echelon. “Shut The Door” is a eulogy, and it closes the record looking downward in a concentrated stride.

Next year, Nevermind will be celebrating 30 years. While this admittedly momentous occasion will likely occupy some level of interest for those of us who were affected by it, for now, with no shadow cast upon it, Fugazi’s debut is document to a band who’s been there all along, acting flagbearer to a scene, author to a sound, and paragon of integrity at a time when it would have been much easier to cash in.

Sincerely,
Letters From A Tapehead
dischord fugazi ian mackaye letters from a tapehead is a fanboy notes from the record room