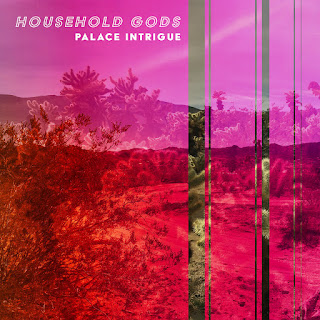 "Rest In Power" is a track by a band called Household Gods, a foursome comprised of musicians David Pajo (Slint, Papa M), Vern Rumsey (Unwound), Lauren K. Newman (LKN Band, Palo Verde) and Conan Neutron (Conan Neutron & the Secret Friends, Replicator). This track is a tribute to Newman who'd passed away in 2019, and features her thoughts and musically-based recall over the band's muck-addled and ethereally-charged crawl, all of which had been culled from interviews.

The fact that this track was recorded by Dave Catching is not a shock. There's a distinct sonic quality consistent with any recording managed at Rancho De La Luna, and guitar-oriented rock typically sounds unencumbered, aiming to travel endlessly within the aurally limitless expanses of Joshua Tree.

Household Gods' upcoming album, Palace Intrigue, is up for pre-order and will be released June 5th.

The record, Palace Intrigue, was revealed to the world on May 1st for Bandcamp's Covid-19 day of action.

Listeners can hear one song, and soon all of them. $10 pre-order for the digital on Bandcamp.