Via Thrill Jockey:
Following the release of their new album The Consuming Flame: Open Exercises in Group Form, and a recent performance Bandcamp live showcasing new video pieces, electronic duo Matmos have shared five new excerpt music videos. Included in the set is a video for excerpt "Friendsylum" directed by Ed Apodaca, as well as excerpts "Circle of Swords" (featuring clipping.), "Blessed Order Of", "Boomchicka", and "Maybeism", the latter four of which were created by the band. Each of the five videos takes on Matmos' method of collage from different angles, blending striking imagery with the mundane, disturbing with the delightful. 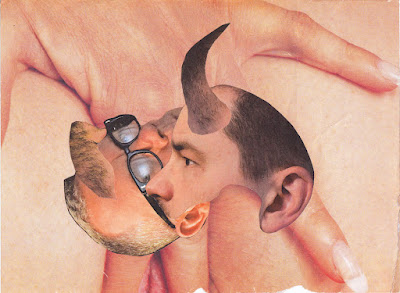 Even for Matmos, The Consuming Flame's 99 participants are wildly eclectic. Some are collaborators that have worked with Matmos for many years, while others are near total strangers found through open calls on internet forums for contributions at 99 beats per minute. There are players from the conservatory-trained world of “new music” (Kate Soper, Jennifer Walshe) and figures from the extreme music underground (members of Pig Destroyer, Sutekh Hexen and Locrian), as well as auteurs from the world of “noise” music (Twig Harper, Moth Cock, Bromp Treb, Id M Theft Able). There are distinguished alumni and contemporary luminaries of electronic music (Mouse on Mars, Daniel Lopatin / Oneohtrix Point Never, DeForrest Brown Jr., J. G. Thirlwell, Matthew Herbert, Rabit and Giant Swan) alongside artists associated with indie rock and folk traditions (Yo La Tengo and Marisa Anderson). Part exquisite-corpse and part virtual festival, the results retain Matmos’ distinct and unique voice despite the promiscuously open nature of these collaborations.
Matmos on Facebook
Matmos on Instagram
Matmos on Thrill Jockey
Drew Daniel on Twitter
M.C. Schmidt on Twitter