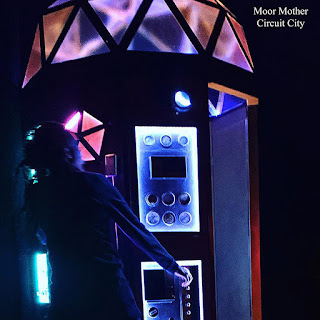 After the first five or so turbulent minutes of Moor Mother’s Circuit City have elapsed, the poet asks, “You ever been robbed of your genius? And have your talent lay waste with bones ripped from its neck? Well, that’s circuit city.” Aggro-poetic stanzas, stern and convincing, cut through a mire of scribbling saxophone and whirling drums fills for the majority of Circuit City, a four-act work by Moor Mother, (or Camae Ayewa). Following a release earlier this year from her project Irreversible Entanglements titled Who Sent You?, and last year’s excellent Analog Fluids of Sonic Black Holes, Ayewa’s Circuit City was performed live as a play, this recorded version featuring her poetry set to free jazz, which provides her material an appropriate and cacophonous backdrop. “The way they house us,” Ayewa says in opening track “Act 1 – Working Machine”, “The way they make home a dream, a wish—anything but a human right.” Circuit City is meant to take place in a living room, Ayewa’s observations delivered in a manner that has more in common with journalism than poetic expression. She’s never overwhelmed by her words. She doesn’t audibly give in to emotion or pain. She simply reports, a solid level of strength in her voice commanding listener attention. With the exception of “Act 3 – Time Of No Time”, its repetition and relative structural stability offering some respite from the album’s otherwise Impulse!-centric array of squeal and battery, Circuit City is as relentless as it is powerful, a necessary statement belonging to the now of political and social unrest.
(Transcribed from 5 Albums to Check Out on October’s Bandcamp Friday featured at No Ripcord.)
Sincerely,
Letters From A Tapehead
bandcamp don giovanni free jazz no ripcord poet