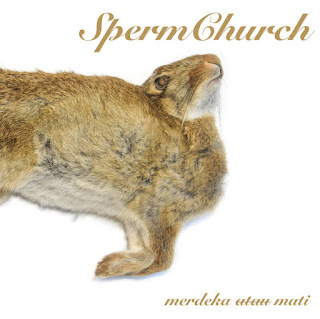 SpermChurch
merdeka atau mati
Riverworm Records
Released: 9/3/21
SpermChurch is the name gifted to this collaborative union between bassist Trevor Dunn (Mr. Bungle, Fantômas, John Zorn) and the caffeinated electronics of the late Dutch-Indonesian artist Sannety (Sanne van Hek). The first recordings produced by this outing have been collected into a 10-track LP called, medeka atau mati, the motto of the Indonesian Revolution which translates to "Live Free or Die".
No stranger to exploring every available corner of creative freedom granted by being dubbed avant-garde, medeka atau mati is the first official release for Dunn's Riverworm Records label and likely sets a tone for the type of albums his label will produce.
Overwhelmed by relentless irregularity, Dunn and Sannety immediately knock over any viable structures seconds after they're built, ("You Thoroughly Want the Thing That Mounts" comes to mind), Dunn's squiggly thuds and dragged pulsars thickly seeping between any available area between Sannety's frantic series of beat-loops. My initial feelings were irritation and my threshold for audible tolerance (albeit normally pretty high) was tested throughout this album's 35 minute runtime.
However, in relation to free jazz, power electronics, dark ambient, and untethered noise, SpermChurch isn't so boldly out-of-step. What it is, though, is excitedly playful. Keeping in mind Dunn's creative endeavors, it's fair to say that he is a guest in Sannety's world and that he took this collaboration seriously but not at the expense of fun. As aimless as this project can sound, additional listens reveal shape, a surprising lack of pretension, and creative enthusiasm. It's not often a challenging project can exist without demonstrably suffocating under the weight of ego or self-indulgence.

SpermChurch: A Puzzle & Not Intended For Use [created by Josef Wakeman & Sannety] from Riverworm Records on Vimeo.