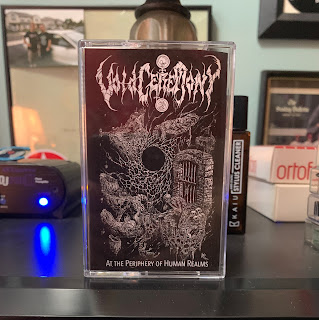 When the PR notification arrived for VoidCeremony's At The Periphery of Human Realms, a YouTube link to preview the full album was made available and I wanted to survey the comments following my first listen. Evidently perturbed at the fact that the album is only available on cassette via 20 Buck Spin, a commenter asked that Death Metal (addressing the whole genre, apparently), "… get away from these shitty cassettes?! Please?" The label's response was simply (and wisely), "A: No."

The first track, "Entropic Reflections Continuum", takes its name from the band's debut. Good's bass rhythm (recorded in Australia) is refreshingly audible in spite of the deluge of overpowering guitar sounds that expectedly run prevalent throughout the song's runtime. When the solos emerge you can sort of tell that Tougas had recorded his parts separately, the tone discernably polished by contrast to the mire beneath.

Having bought the tape and sampled this album both digitally and through a stereo, those without tape decks are missing out.

Author's Note: As of this review, there are 9 copies left at 20 Buck Spin's Bandcamp. If you like what you hear, please support the band.