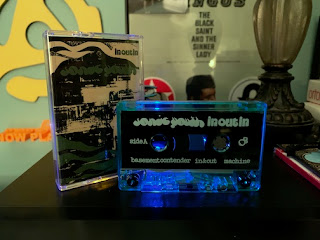 Sonic Youth
In/OUT/In
Three Lobed Recordings
Released: 3/18/22
It was late in the life of Sonic Youth to release an album as excellent as Murray Street.
Following my first listen of In/OUT/In, the recently issued compilation of material recorded during the band's Jim O'Rourke era, my ears could discern the time and place of these recordings (2000-2010) and I felt the need to revisit Murray Street (2002), Sonic Nurse (2004), and Rather Ripped (2006). This trio of releases would be the last of SY's major-label output prior to joining Matador for their final album, The Eternal (2009), and were met with almost-uniform positivity. With their Y2K-emergent NYC Ghosts and Flowers, reactive ambition clouded some of their decisions (plus, the theft of their instruments the prior year forced them to pick-up old instruments and start from scratch) and the band committed the sin of hyper-indulgence.
Personally, I liked NYC Ghosts and Flowers, but the three-album comedown that followed surpassed it, the band focused on marrying their brand of melody with moderate allowances of noise-pollution so as not to completely abandon their identity as 2nd-wave-no-wave pioneers. As a third act for Sonic Youth, those three albums, especially Murray Street, rival their earliest and most seminal work.
In/Out/In features five cuts and it's the first relatively unheard music to emerge from Sonic Youth since 2011's SYR9: Simon Werner a disparu soundtrack album. Since disbanding in 2011, time and energy have been funneled into the preservation of Sonic Youth's legacy, resulting in an online archive on Bandcamp that's stacked with live material and assorted oddities.
As mentioned above, SY's creative state of being informs In/OUT/In clearly enough to be immediately slotted into their final decade. The improvisations featured herein, with the exception of "Social Static", are relatively tight in that they sound like the group's core ideas have undergone at least some level of consideration before RECORD was pressed. The initial string-play of "Basement Contender" comes across gentle enough, its intensity gradually and patiently dialed up as variations to the theme are introduced. Between Thurston Moore and Lee Ranaldo, harmonic strings are plucked as sharper chords or ghostly notes are strummed, the volume kept moderate till the last 20 or so seconds of music.
"In & Out" features Kim Gordon providing some syllabic freestyling over persistent thumps from the kick drum and snare rim/hi-hat taps. Evocative of Can or Neu!, the track's unwavering rhythmic pattern is hypnotic enough that its 7+-minute runtime elapses quickly.
Aside from missing vocals, "Machine" sounds fully-resolved. Steve Shelley's percussive backdrop carries every angled stab of guitar play that follows and it's loud enough that the Moore/Ranaldo dynamic doesn't smother him. Of the songs on this album, "Machine" could very well have occupied the track list of any of those aforementioned trio of albums that comprised the last of SY's major label output.
"Sonic Static" is a noise track composed of tweaked frequencies and serrated fragments of distorted sound strung together overtop periods of improvised percussion set to a winded jog or completely absent for stretches of amplified racket. It's the only instance on the album that may test a listener's tolerance, (the track is 11+ minutes). That said, the inclusion of a track like this really shouldn't shock or alienate any SY fan. Throughout SY's tenure, their penchant for producing electrified disarray has more or less defined them.
With additional sounds from Jim O'Rourke, the myriad tears, scrapes, and sullen guitar strums that comprise what is almost the first half of "Out & In" eventually give way to frantic runs of intensely layered guitar tone and wiry solos, propped up with machine-level precision from Shelley and Gordon. Again, I think of Neu!, specifically the track "Negativland" which features the same sort of slow burn first act leading into an intensified and repetitious outro embellished with guitar shrieks. "Out & In" is great with a set of headphones as its aural mutations bounce from ear-to-ear while the six-strings are scrubbed and bent into bouts of immersive discord. Immediate replays have ensued and continue.
Sincerely,
Letters From A Tapehead
00s cassette release compilation sonic youth thurston moore what's (re)new