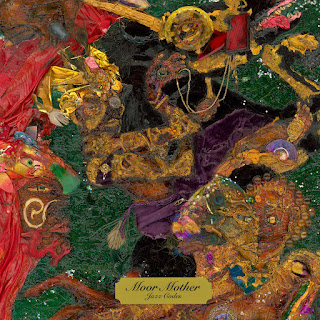 "Life got us confused? Where are we going?"
Speaking from personal line of sight, I find myself continually enamored with and challenged by the work of Camae Ayewa (Moor Mother). Following 2021's entrancing Black Encyclopedia of Air, Jazz Codes, Ayewa's 2nd LP for Anti-, has been announced with the lead single and video, "WOODY SHAW".
Following sprays of sonorous howls and a lovely red herring R&B set-up, "WOODY SHAW" takes a pause before shifting into a turbulent free jazz backdrop, a cyclical stand-up bass riff anchoring the otherwise discordant sax, drums, and vibraphone. "Woody Shaw elevator outta town!" Ayewa speaks, "Life got us going up and down. Who's coming? Who's coming for our ratios?"
The video premiered on June 8th.
Jazz Codes can be pre-ordered at ANTI-. Official release date is July 1st.
All info and links were provided by Stereo Sanctity.
“It’s poetry that drives this album. The stories of these artists and countless others not named but felt - is the leading motivation. I wanted to honor & give offerings, hold them in my body, dream with them, send sweetness.” – Camae Ayewa

Today Moor Mother announces new album ‘Jazz Codes,’ out on July 1st - her second album for ANTI- and a companion to her celebrated 2021 release ’Black Encyclopedia of the Air‘.

Alongside today’s album announcement she has shared a video for the new track ”Woody Shaw” feat. Melanie Charles, directed by Cyrus Moussavi.

“Woody Shaw” was filmed in the Leimert Park headquarters of the Pan Afrikan Peoples Arkestra, founded in 1961 by Horace Tapscott with the vision of promoting a true community orchestra dedicated to Black music in South Central LA. Though Tapscott passed in ‘99, PAPA still goes strong under the leadership of his son, Mekala.

Inspired by a book of poems of the same name - a collection of poems written in honor of jazz and blues icons like Woody Shaw, Amina Claudine Myers, and Mary Lou Williams - ’Jazz Codes’ uses poetry & free jazz as a starting point, moving toward more melody, more singing voices, more choruses and more complexity. In its warm, densely layered course through jazz, blues, soul, hip-hop, ’Jazz Codes’ sets the ear blissfully adrift and unhitches the mind from habit. Through her work, Ayewa illuminates the principles of her interdisciplinary collaborative practice Black Quantum Futurism, a theoretical framework for creating counter-chronologies and envisioning Black quantum womanist futures that rupture exclusionary versions of history and future through art, writing, music, and performance.

Moor Mother - aka the songwriter, composer, vocalist, poet, and visual artist Camae Ayewa – is also a professor at the University of Southern California's Thornton School of Music. She released her debut album 'Fetish Bones' in 2016 and has since put out an abundance of acclaimed music, both as a solo artist and in collaboration with other musicians who share her drive to dig up the untold. She is a member of many other groups including the free jazz group Irreversible Entanglements, 700 Bliss and moor jewelry. She has also toured and recorded with The Art Ensemble of Chicago and Nicole Mitchell.

This summer Moor Mother will be performing at End of The Road Festival in Dorset and various other European festivals; she will also be headlining an album release show at Los Angeles’s Resident on July 8. All upcoming dates are listed below.

'Jazz Codes' will be released on July 1st through ANTI-. Pre-order here.