"Every Motherfucker Is Your Brother" by Oort Smog 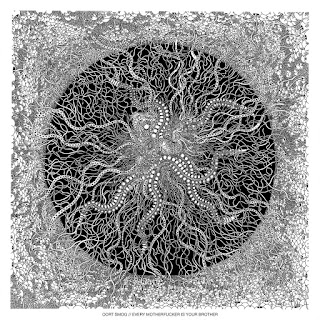 "Every Motherfucker Is Your Brother".
This is the sort of combination of words that I long to find buried in the brittle pages of some forgotten book of vulgar proverbs or pulled from the broken shards of the evening's takeout fortune cookie. Perhaps this five-word bit of excellence was the work of some once-aspirational, albeit failed, author, unhappy to be toiling in the marketplace of meaningless phrases and bland advice found within the confines of often-discarded cookies who found inspiration one day and followed through.
However, this phrase isn't a proverb nor is it a fortune, but the title track of a single-piece 12" by the duo Oort Smog, an effort by multi-instrumentalist Patrick Shiroishi and drummer Mark Kimbrell. For now, a less than three-minute clip is available as "Every Motherfucker" and showcases a bit of percussive prog-jazz, loose enough at moments for the brass to scribble outside the lines on occasion but never at the expense of the math-centric form at play. Certainly this doesn't hit with the same level of volatility as GRID, but hits well enough nonetheless, just maybe with a tad more lightness in mind.
Every Motherfucker Is Your Brother is scheduled to release on November 11th, 2022 via AKP Recordings, so we have much time to salivate.
The album is available for pre-order at Oort Smog's Bandcamp.
Reviewer note: Sax Ruins was referenced in the PR for EMIYB and it's too good of a comparison.
All info, links, and music were provided by the excellent people at Clandestine Label Services.
Oort Smog carries the torch of the saxophone and drums duo tradition, beginning in early formations such as John Coltrane and Rashied Ali and continuing through the years via Anthony Braxton and Andrew Cyrille, Sax Ruins, and Dead Neanderthals. As Oort Smog, Mark Kimbrell and Patrick Shiroishi combine elements of brutal prog (both are members of Upsilon Acrux) and free improvisation on their latest release, a long form composition powerfully titled Every Motherfucker Is Your Brother.

“Oort Smog is a duo to the core. Patrick and I lean on each other, pull each other out of our comfort zones, and push each other forward,” Kimbrell says. “All of that is essential to our process and the music itself.”

Every Motherfucker Is Your Brother is the band’s second offering, continuing the complexities of their first record, a hybrid of tightly arranged changes and free jazz improvisation. Daniel Zaidenstadt returns as engineer to help sculpt the sonics, blending and fully utilizing the space of Human Resources to its fullest potential. “When we first started Oort Smog, I was extremely nervous to play with Mark … he is such a powerhouse and technician of the drums,” reflects Shiroishi. “Primarily my idea of playing with guitar pedals and amp was to be able to compete with Mark’s dynamics. Now, almost a decade in, this band has allowed me to experiment not only with effects, but to try new things, write new things, and reach for new things.”

Written over the course of eighteen months and recorded during the pandemic and the explosion of demonstrations around the deaths of George Floyd and Breonna Taylor, Oort Smog drew from a number of influences to create their own sound, one of urgency, heaviness and hope. “We wanted this second record to include a lot of things but still be a cohesive piece of music, and I truly believe we accomplished that,” Shiroishi says. “The extracts we chose are from two sections of the piece that highlight the fluidity and tightness we’ve been able to build through the past eight years. We named the piece after we finished recording it with Daniel and it is a direct, oppositional response to the racial injustice that infects this country."

Patrick Shiroishi is a Japanese-American multi-instrumentalist and composer based in Los Angeles who is perhaps best known for his extensive and incredibly intense work with the saxophone. Over the last decade he has established himself as one of the premier improvising musicians in Los Angeles, playing solo and in numerous collaborative projects with Claire Rousay, Angel Deradoorian, Ted Byrnes, Luke Stewart, Fuubutsushi, Jessica Ackerley, and many more. Shiroishi is a foundational player in Los Angeles's vast musical expanse, and has over the past few years made a name for himself globally as one of the most creative and prolific living saxophonists.

Mark Kimbrell is a Los Angeles-based drummer, known for his high-energy propulsive drumming style. After a two-year study of commercial music at Musicians Institute, Mark abandoned the pursuit of the mainstream in favor of more esoteric forms, immersing in the fertile creativia of Los Angeles DIY music. This led to a stint in Upsilon Acrux, alongside fellow drummer Dylan Fujioka and saxophonist Patrick Shiroishi, with whom he formed Oort Smog in 2014. “As long as I’ve been conscious, I’ve known that I was a drummer," Kimbrell says. "Though my extended family is extremely musical, my parents were not. When I got to be a teenager and finally had the opportunity to become a drummer, I realized that I didn’t know shit about music. I didn’t know shit about sound. Nothing. The rest of the story is just relentlessly trying to catch up.”