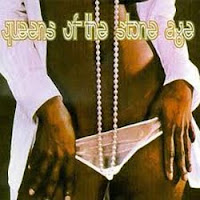 So, I'm not sure if the reported partnership between Rekords Rekords and Ipecac Recordings dissolved completely, but Domino Records is now the NEW entity dealing with Josh Homme's label and the long-awaited Queens of the Stone Age reissue, which has now been pushed to March 7th.

The Mini Mansions and Alain Johannes albums that had been previously released by Ipecac will also be reissued by Domino.

The big news today is that Domino has joined forces with Queens of the Stone Age front-man, Joshua Homme’s Rekords Rekords label, marketing, promoting and distributing select titles from their impressive catalogue. The first title will be the seminal eponymous debut album from Queens of the Stone Age, which we will be reissuing on March 7th 2011. Excited is not really the word to describe how we feel about this newly forged working relationship.

As well as releasing the debut Queens of the Stone Age record, Domino will also be releasing some very special Rekords Rekords albums from Mini Mansions and Alain Johannes in May, which we’re absolutely dying to tell you about, but which will have to wait for the time being.

Anyway, let’s go back to the beginning. Queens of the Stone Age’s debut self titled album was the one that really set things in motion for the band who would go on to be recognized for rejuvenating rock music at the turn of the new millennium. Having cut his teeth as the guitarist in the criminally overlooked, highly influential Kyuss, a group who specialized in creating sludgy low-end epics, Josh Homme upped and left the California Desert for the Pacific Northwest. It was here he formed Gamma Ray, later to be known as Queens of the Stone Age, where hooks and tighter song structure took precedent in his creative output.

On returning to his old stomping grounds Homme hooked up with Kyuss drummer Alfredo Hernandez to record as a fake trio (bass player “Carlo Von Sexron” is a nom-de-boom for Homme) and Queens of the Stone Age effectively came into full bloom. Without slipping into total hyperbole, which in this instance we're finding is very hard not to do, this reissue documents the beginnings of something truly special, with Homme introducing the world to his smooth, totally unique vocal stylings, as well as his killer way with a melody. One of the most incredible things about this record is how overlooked it was by radio at the time of it’s release, especially taking into consideration the abundance of ‘honest to God’ catchy songs featured on it, “How To Handle A Rope” being a prime example. What Queens of the Stone Age created was a record that was both experimental and forward thinking as well as truly timeless, evoking so many eras of rock in such a seemingly effortless and sincere way. If important records truly exist, we feel confident in stating, this really is one of them.

This Rekords Records re-issue, in conjunction with Domino, has been fully remastered from the original tapes and has been expanded by three tracks. “The Bronze” & “These Aren’t the Droids Your Looking For” (from the split EP from ‘98) and “Spiders and Vinegaroons” which was part of the posthumous Kyuss/QOTSA split EP. 'Queens Of The Stone Age' will be available on CD (REK001CD), double vinyl LP (REK001LP) and via digital download (REK001D).