- June 22, 2011
It was both the thrill of owning something rare and the nausea-inducing prospect of missing out that caused me to instinctively lay down $12 for a limited-edition cassette reissue of Dinosaur Jr.’s Bug.  It arrived today, wrapped up in cellophane and is now laying on my desk, begging me to stick SIDE A into my tape deck, press PLAY and magically transport myself back to the negative energy of my teenage bedroom where I was both enlightened and depressed. 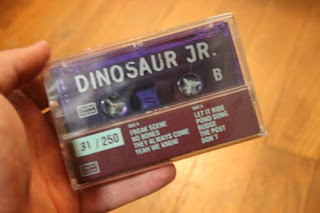 Joyful Noise Recordings made modest headlines throughout the indiesphere a few weeks ago with news of this reissue. Why? Well, there’s a purist factor. Bug was originally released on cassette via SST Records making this edition somewhat of an artifact. The copies are even hand-numbered, (mine’s #31), and since there were only 250 produced, (half of which will be on sale during Dinosaur Jr.’s Bug tour), they’re now all gone. If you check the catalogue at JNR’s website, underneath Bug you will find “OUT OF PRINT.” So, I’m happy that I didn’t miss the opportunity. 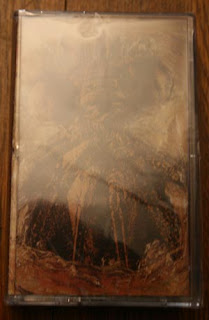 Now, though, I have a classic album on an obsolete format that’s seen a limited run and I’m not sure I should open it. Thusly, the actual enjoyment of the music and the philistine-influenced potential for investment are sparring factors conjured by this purchase.

Maybe I can just find a used copy of Bug on CD and let my cassette retain its untouched, mint, collector-friendly condition.  Or, I can just rip it open and enjoy.  Either way, it's a pretty cool acquisition.

MilesOfTrane said…
You have to decide if it's an investment or music. If the later, rip it open and play. If the former, will a cassette ever really be the ship that comes in?
6/22/2011 11:19 PM

Sean Caldwell said…
Oh, I certainly don't expect it to be the ship that comes in. The value of a cassette tape, rare or not, in this day and age won't amount to much. But, it's difficult to appreciate something like this as music when it's dressed up as memorabilia, numbered like the limited edition that it is. That's all I was getting at.