- December 06, 2011
With 2011 winding down and the "Best Of" lists bombarding readers left and right, announcements for 2012 releases are surfacing.  Drone quartet Earth will be releasing the sequel to this year's excellent album, Angels Of Darkness, Demons Of Light I, (aptly updated to "II"), on February 14th of 2012.  No tracks are available yet, but thanks to Earsplit PR, you can read release info below.

A review for Earth's Angels Of Darkness, Demons Of Light I can be read at No Ripcord.  Also, I had the opportunity to see Earth perform this year in Philadelphia and wrote all about it.  You can read that here.

All links and information come courtesy of Earsplit PR. 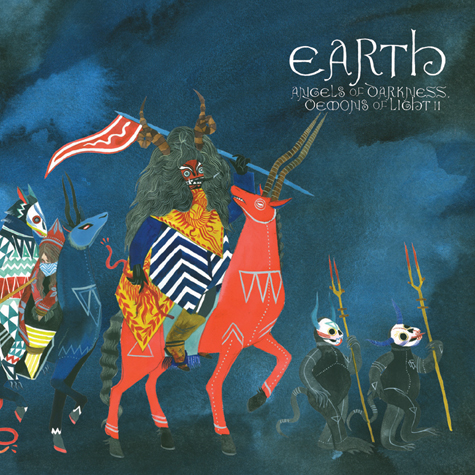 The second half of Seattle drone icons EARTH's Angels of Darkness, Demons of Light is being prepared for release on Southern Lord in North America this February 14th on CD, LP and digital download formats.

Recorded in the same two week session as 2011's lauded Angels of Darkness, Demons of Light I by Stuart Hallerman at Avast and mastered by Mell Detmer, Angels of Darkness, Demons of Light II carries on in the freely and folkloric vein of the last release and invokes even more improvisational and unrestrained energy than its predecessor.
Angels Of Darkness, Demons Of Light II is striking in many ways, not least in the wildly improvised nature of this particular recording. The songs "Sigil Of Brass" and "The Corascene Dog" perfectly emphasize how the interplay between the foursome has evolved even further since the first installment. Meanwhile, the track "His Teeth Did Brightly Shine" veers further into an entirely other direction, recalling sounds of the great British Acid Folk generation. This new material brings forth some highly original and deeply mesmerizing tones throughout, at times more hopeful and less dark and death oriented than previous work. Angels Of Darkness, Demons Of Light II is ultimately a completely unanticipated direction for EARTH, and a very welcome one at that.

The line-up again consists of Adrienne Davies on drums and percussion (on this release there is more percussion of all sorts), Lori Goldston (Nirvana, David Byrne, Black Cat Orchestra, Laura Veirs) returns on cello, and Karl Blau (K Records, Laura Veirs, Microphones) plays bass. This also marks the first time the band on the record has toured outside of the US West Coast in preparation for the album. As with the first part, it again has truly amazing artwork by Stacey Rozich. View the cover art and more at this location.
Angels Of Darkness, Demons Of Light II Track Listing:
1. Sigil of Brass
2. His Teeth Did Brightly Shine
3. Multiplicity of Doors
4. The Corascene Dog
5. The Rakehell