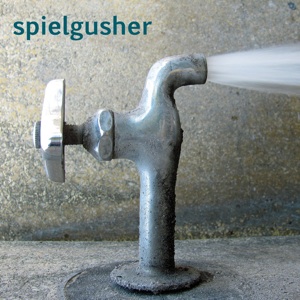 Legendary ex-Minuteman Mike Watt has had his name attached to four albums in two years, (if I’m not mistaken or missing anything): the jazz-quartet debut of Floored By Four, his own third punk opera, Hyphenated-Man, dos’ latest album with Kira Roessler and now the spoken word/art rock mutation, spielgusher, aided by the witticisms and prosaic vocal spew of rock critic, Richard Meltzer. If “econo” truly is the yardstick by which Watt continues to create music, this term doesn’t seem to apply to the man’s prolificacy.

The spielgusher concept was apparently born late in the Minutemen’s run, Watt and singer/guitarist D. Boon both Meltzer enthusiasts. Meltzer proposed the collaboration and sent along lyrics, or “spiels,” and even planned to add saxophone music. But, as the story unfortunately went, D. Boon passed away and the Minutemen ceased to be. The project was put on hold indefinitely. Watt revisited the idea much later around 2004, Meltzer having submitted a CD of his own verses read aloud and the spielgusher project took shape musically around 2008 in the midst of a creative friendship Watt had sparked with Yuko Araki (drums) and Hirotaka Shimizu (guitar) of Cornelius fame.

Origin stuff’s out the way…


As much as it’s a generalization to say, I think there’s substantial evidence to support the belief that music critics long to be the performers. For lack of musical ability, compensation is made through qualifying research, fandom, a well-stocked record collection and maybe some knack with the English language or just knowledge of the alphabet. Lester Bangs, Lenny Kaye, Patti Smith… And, Richard Meltzer, who doesn’t deviate so much from his trade as rock writer, but instead assumes poet duties atop Mike Watt’s jazz punk abstractions, is offered the opportunity to exist in a recorded format, exposed to his own kind’s scrutiny and skepticism. The fragments he gushes, the observations he dryly notes, the oft-vulgar musings his headspace entertains… Over 63 tracks, some of which are instrumental, Meltzer doesn’t offer much in terms of passion, much of the text read aloud in a somewhat clinical manner.

Meltzer, though, through his tone, makes his non-rhythmic poetry at least amusing. An old man saying things like, “I want you to come to my door with your skirt raised and your pussy showing,” especially with the slight tinge of complacency that seems to shroud every syllable, makes him sound fascinatingly bored with what he’s written. Can you imagine making such requests of a female while seeming completely uninterested in your fantasy? You do get a sense that these words were written by a virile young man, juxtaposition subliminally put across as Meltzer speaks.


However, the admittance of always saving worms from being fried on hot sidewalks (“ALWAYS”) or the severe punishment he believes parents should receive for introducing the idea of Hell to children (“RED HERRING”) humanize his presence enough. Not every word is gold, (“FUCK AWARENESS WEEK” is pretty goofy), but Meltzer’s wit still pulses as Watt and Co. play, their own sometimes seconds long pieces of music the truly avant factor during spielgusher’s one-man conversation. At times it sounds like Watt recycles some old bass lines, “PERSON WHO'S DEAD (FOR WILD MAN FISCHER)” and “CHOWDER, ANYONE?” sounding very familiar, but with the amount of songs the man has written over the course of his thirty-plus years strumming four strings, I could imagine it’s difficult to avoid repeating yourself from time to time. Next to Meltzer, Watt still at least sounds inspired, his younger self not much different than the current one.