Showing posts from March, 2007
Show all

At the Mercy of the Tall Indie Heads: Menomena/Land of Talk at Johnny Brenda’s 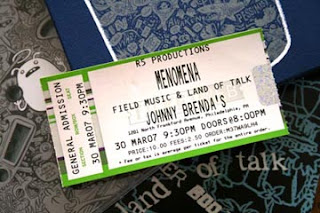 Land of Talk Menomena ( Field Music was on the bill, but dropped off) Johnny Brenda’s Philadelphia, PA 3.30.07 Personnel: Menomena — Brent Knopf – Vocals, Guitar, Keyboards, Glockenspiel, Sampler Justin Harris – Vocals, Guitar, Bass, Baritone sax, Alto sax Danny Seim – Vocals, Percussion, Drums Land of Talk — Elizabeth Powell – Lead Vocal, Guitar Chris McCarron – Bass Bucky Wheaton – Drums It was about 7:45PM when my wife and I arrived on Girard Avenue, backing the car behind a Mercedes and figuring that, if ANYBODY’S car was going to get broken into, it wasn’t going to be mine. A group of double-dutching girls were doing their thing at the corner while we exited the car and started walking the two blocks to Johnny Brenda’s , the venue wherein Menomena and Land of Talk would be playing to a sold-out crowd of backpacks, blazers and horn-rims. The plan was to meet up early with our group for some dinner and drinking. The show wasn’t going to start until 9:30, so the beer, food an
2 comments
Read more 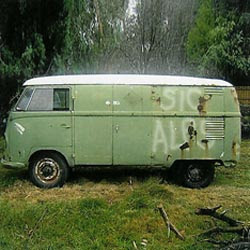 Sic Alps Pleasures & Treasures Animal Disguise Records Released 10.06 Rating: 7.5 out of 10 A month or so ago on a very cold Saturday morning, I was combing the new releases section at A.K.A. Music , my favorite record-buying spot in Philly. Under my right arm, was already a stack of listening that I was set on buying that day so I was almost ready to pay and take off. But, then I saw Pleasures & Treasures , the full length album from San Francisco’s Sic Alps : the image of a rusting VW van sitting atop a brown and green patch of grass, the name SIC ALPS crudely spray-painted on the van’s scabbed exterior. There had to be something to that cover, so I added the CD to my stack and brought it straight to the horn-rimmed record nerd behind the cash register. While filing through the day’s finds, he pulled out the Sic Alps CD I had and went on a spiel that lasted about 5 seconds but felt like 5 minutes: “Aw, dude…this is great, man. You’re gonna love this!” I was happy to he
Post a Comment
Read more

To Whom It May Interest, Lately, I’ve been hitting the record stores with a fury, partly because I’ve been offered a couple opportunities, mostly because I’m constantly on the lookout for music to write about here. Since January, I’ve picked up a fairly eclectic selection of CDs and vinyl, a lot of which dates back before 2007, but still may intrigue music fans. Some of these records could be old news to you, or some of them could peak interest. Either way, I thought I would start documenting my record store purchases and share whatever grabs my attention. A.K.A. Music , Philadelphia, PA: Various Artists American Hardcore: The History of American Punk Rock 1980-1986 12” Blue Vinyl Rhino Released 10.10.06 Once I got this home, I listened to it probably 5 times in the space of an hour and a half. It’s an awesome collection of songs, released as the soundtrack for the documentary of the same name. It includes Black Flag , Bad Brains , Minor Threat , Articles of Faith , D.R.I. and
3 comments
Read more Bloc Party A Weekend in the City Vice Released 2.6.07 Rating: 5 out of 10 It’s difficult to know how to take Bloc Party . Yeah, they’re a good band and they know how to pull a song together. But, I have to wonder where they see themselves in the scheme of things when I hear a song like “Uniform,” which is an indictment of the youth of today and the ease at which they clamor onto clichés, namely clothes, complacency and materialism. They use the mall, epitome of commercial influence and excess, as the backdrop for their case: “There was a sense of disappointment as we left the mall All the young people looked the same” Now, I myself have lambasted the legions of teenage “freaks” (especially the “punk rockers”) that think they’re making a statement by going to the mall to “freak” people out and act like they don’t care what anyone thinks of them. But, there’s also an encouraged group of mainstream types that frequent the mall, marching in and out of stores with cell phones growing ou
Post a Comment
Read more
More posts