Showing posts from January, 2008
Show all

I read last week that Last.fm , the online music source that CBS acquired last year, is loosening some restrictions and providing listeners with an extensive music archive that can be accessed for FREE. The tracks, however, are streamed and can only be used for up to THREE times, so nobody's taking them home to do with as they wish. I think, after your THREE allowances have been exhausted, you wind up subscribing to the service for a fee. Otherwise, the site is paid for by the advertisers, in the tradition of typical radio. From a "benefit" standpoint, Last.fm's been made available for independent artists (no label) to use for promotion. Royalties will be paid to these artists based on the amount of times their respective tracks have attracted enough attention to earn a PLAY. So, it's good that some money is going toward those that are struggling to make it, though there's no way to determine whether or not the advertisers will have any say in regard to t
Post a Comment
Read more 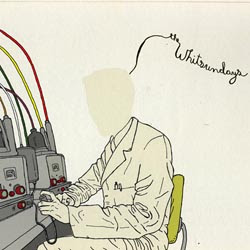 The Whitsundays s/t Friendly Fire Recordings Releasing 1.22.08 Rating 7.75/10 Has music really evolved? Rhetorical question: It has, but not so much in the last twenty years. If anything, the Indie scene’s been keeping the growth relatively neutral, still capitalizing on Smiths riffs and leaning toward the Ian Curtis school of low pitch depression. In the last few years there’ve definitely been some shining stars, but when bands like Interpol show up as part of a scene’s leading crowd, you do have to wonder when the ideas stopped. At this point, the answer seems to be “well, just go further into the past, dig up some sounds, and see what happens.” In 2006, with bands like The M’s and Wolfmother , the 60s and 70s were more or less reissued and beaten over the ears of listeners, ringing out with cries of “it ain’t new, but at least it ain’t the 80s!!!!” There’s truth there and though their explorations were competent, they were just explorations. There’s no shortage of throwb
Post a Comment
Read more

Post-holiday fanboy purchases. Don’t you love it when you can buy shit for yourself again? Borders bookstore, King Of Prussia, PA: Miles Davis The Complete On The Corner Sessions 6 CD Boxed Set Columbia/Legacy Released 9.25.07 After realizing that I’d thought of very little else other than The Complete On The Corner Sessions box set once it’d been made known to me that it existed, I had to figure out a way to get one. With Christmas having passed and the availability of “buy yourself something fun” money, I strolled into a local BORDERS during my lunch hour and strolled out with this metallically packaged beauty. It is however just as daunting as I thought it would be to listen to. Six plus hours of Miles Davis jamming out, creating soundscapes the likes of which modern America still hasn’t quite been able to fathom. Even the package seems ahead of its time. Seriously there is some incredible music in this set to explore, but it is an acquired taste. Completely worth the money
3 comments
Read more

“Money’s short; times are hard. Here’s your fucking Christmas card.” I remember receiving an over-photocopied and tattered fax of a joke Christmas card when I was in high school, the above sentiment printed on its front with a miserable rendering of Santa flipping off any onlooker. I thought it was hilarious, so I showed it to all my friends. The poem inside, an X-rated version of “’Twas The Night Before Christmas,” was recited by me annually on the school bus, just before our weeklong stretch of cold air, white lights and pine needles. Oh, and there were gifts too. Money being a little short, times being a little hard, (and no X-rated poems to recite), new reviews are going to be a little sporadic this year. Entries might be too. I’ll do my best to keep Letters going. In the meantime, here’s some music to check out: The Whitsundays s/t Friendly Fire Recordings Release 1.22.08 There’s an air of 60s Brit Pop being strongly inhaled by The Whitsundays , a Canadian quartet that mus
Post a Comment
Read more