Hughes and Homme rock the Sexy... 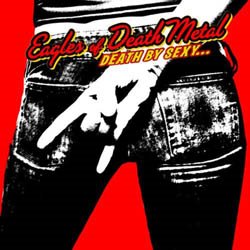 Fans are by and large observant. Every subtle nuance, every obvious cliché, every genre-defining detail is absorbed through those geeky and acute sensory intakes, and available for reference whenever they need be withdrawn from the fanboy library. Granted there are fans out there that lack so much imagination that a regurgitated copy of the object of their affections is the best they can do. But, other fans know how to expand. The realization that it’s been seen or done is depressing, but not hopeless. There are ways to improve. If there weren’t, what would be the point?

Knowing that Jesse “The Devil” Hughes was at one point a journalist means that observation is his bread and butter. It’s really no surprise then that he made a rock record and knew exactly what he was doing.

From start to finish, “Death By Sexy…” is a straight-up good time. Hughes and Queens of the Stone Age’s Joshua Homme have put together a record so raw and unpretentious it almost sounds too good to be true. And Homme, inadvertently avoiding passage within the ego-laden walls of Rock Star Dick-dom, stays in the background and allows Hughes to shine. It’s Jesse’s baby, and it’s one sexy motherfucker.

Clocking in at a little less than 38 minutes, “Death By Sexy…” doesn’t necessarily challenge you in any other way than to try and not get caught up in its groove. Commanding your attention with vocals that fall somewhere between puberty and Prince, Jesse “The Devil” Hughes strums through track after track with a confidence that recalls the Little Richard of yore (a name they actually acknowledge within the liner notes). Unlike it’s predecessor, “Peace Love and Death Metal”, “Death By Sexy…” is very focused and more sure of itself. Aside from the audible benefits of better production (by the capable hands of Homme), the Eagles rev ‘em up and churn ‘em out with certainty. It’s almost as if Hughes and Co. used the first album as a rough draft, figured out how they want to sound and now know how to pull it together. It’s not that they’ve gotten out of the garage, it’s that the garage is a two-door this time around. The raw vitality still lives.

If I were to point out any “brilliant” (for lack of a better word) aspects of this record, I would point out the sequencing. It’s perfect. Within the second it takes to press PLAY, the fast-paced “I Want You So Hard” sets the tone and carries you into “I Gotta Feeling (Just Nineteen), a song that maintains the intensity despite the somewhat slowed up tempo. It almost blows its load with “Cherry Cola” but then manages to painlessly hold it back with the slow-rocking “I Like To Move In the Night”. From that point on, the speed fluctuates. Relaxed to rocking, slow to fast; the pace never bores and the formula changes up just enough to keep from sounding tired. Despite its simplistic garage base, it strays here and there, playing with melody and vocalization. Most notable in this regard are the fast-paced and folky “Solid Gold”, the erratic and strange “Ballad Of Queen Bee and Baby Duck” (Distillers’ frontwoman, and Homme spouse, Brody Dalle contributes some vocals), and the psychedelic and somewhat haunting “Eagle Goth” (which could possibly signify a growth that may latch itself upon the next Eagles outing). When all is said and done, you can’t believe it’s over already. It seems to fly by listen after listen. And you have in fact been tapping your foot the entire time.

Overall, “Death By Sexy…” is a thoroughly enjoyable and smartly produced piece of rock n’ roll that really only wants one thing: How about shaking that ass a little?

Hey, Jet! Weren’t you guys trying to do this?
alternative garage queens of the stone age