To Whom It May Interest #2: PE's Muse Lost Many With Its Mess Age 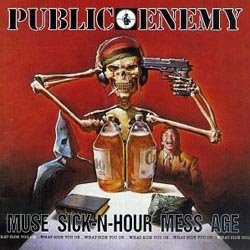 ”If you don’t stand up for somethin,’ you’ll fall for anything.”

In 1994, Public Enemy’s Muse Sick-N-Hour Mess Age left a rather large smear on an otherwise spotless catalog of recorded output that was rife with critical acclaim. By and large, the album was ignored as the hip-hop-buying public were too willing to sip on gin n’ juice, their heads still reeling from the effects of Dre and Snoop’s G-Funk sound blast. PE’s fifth studio record didn’t lack the funk to match the West Coast flavor, nor did it lack the punch that Death Row Records seemed to boast. What it did lack was the “G” factor. PE, being an overtly political powerhouse, were speaking to a generation that was tired of politics. A Democrat was in office, Desert Storm was long gone, grunge was dead and hip-hop was largely based on the rhythms of George Clinton and violence on the streets of South Central. Consequently, Muse Sick-N-Hour Mess Age slipped through the cracks, the unfortunate result of PE’s unwillingness to cater to trends.

Up until this album’s release, Public Enemy were hip-hop’s undisputed mouthpiece for Black America, delivering upon the public a bold array of statements on race, media, class, drugs and the hypocrisy of America’s justice system. Furious enough to incite anger, but perceptive enough to inspire debate, Chuck D, Flavor Flav, Professor Griff, Terminator X and the Security of the First World were more or less a group of musical revivalists; breathing new life into the words, teachings and ideologies of Malcolm X and the Black Panthers by applying them to the present tense. Chuck D, being one of the few in the hip-hop game that actually lived through Martin Luther King, Jr.’s assassination, approached his material with a spirit that was at times militant but also introspective.

Muse is arguably one of Public Enemy’s most vocal and political records in that its music owes much to Black America’s past. Backed mostly by live drums, instruments, and the occasional soul choir, PE strayed from the sound that, up to that point, had been their signature. Experimenting with gospel, funk, jazz, blues and rock, Chuck D and Co. created an incredibly layered and compelling mix of roots music that accentuated the album’s racially and socially charged lyrics. It’s a musician’s rap record: one that almost transcends hip-hop and crosses into the rock and funk realms.

“Rap is a contact sport…,” states Chuck within the first few verses of “Whole Lotta Love Goin’ On In the Middle of Hell,” a bold beginning to a very bold record. From beginning to end the immediacy remains fairly consistent throughout. The appropriately accessible first single, “Give It Up,” is sandwiched between “Whole Lotta Love…” and the funky and bass heavy “What Side You On?” and “Bedlam 13:13.” The album is also peppered by minute or so freestyle tracks that almost serve as mini-intermissions, providing a momentary break from the blast. Flav’s first turn of verse, “What Kind Of Power We Got?,” is a celebratory gospel jam that employs the obligatory soul choir. In case you were wondering by the way, the answer is “Soul Power.”

Up to this point, the content is smart but not necessarily new. The music seems to be the driving force, almost making the content seem secondary. This changes when the powerful and mesmerizing “So Whatcha Gone Do Now?” sneaks in, commanding its listener to hang on to every lyric.

Easily one of the most profound and important hip-hop tracks ever written, especially to come out during G-Funk’s reign, “So Whatcha Gone Now?” is a critique of the “Gangsta” lifestyle and the politics that seem to perpetuate it. Chuck D strongly lambastes “rap, gunz n’ drugs n’ money,” pointing out its shortsighted and greedy hold on black youth in the ghetto. He criticizes the black-on-black crime it creates and essentially states that it’s his wish to be unassociated with the whole thing:

”I’m ‘bout ready to bounce/Trouble on the corner of Blunt Ave. and 40 ounce/Mad uncivilized lifestyles/30 years bids for kids, now that’s wild/I’m raisin’ my child/I’m steppin’ to the curb with a sign/DO NOT DISTURB…”

At the song’s climax, a series of sound bytes featuring uncomfortably numerous uses of the word “nigger” are heavily applied, adding extra commentary to the strength of the song. One can only assume that this track may have had more of an effect on the “gangsta” trend had this record reached more ears.

“White Heaven/Black Hell,” one of the album’s few throwaway tracks, acts as a shout-out to all who’ve been dealt a bad hand thanks to racial persecution. It’s the only instance where the album seems to lack the content to back up its sentiment. The ultra-funky “Race Against Time” and “Aintnuttin’ Buttersong” retrieve the album’s energy, interrupted in-between by the half-minute “They Used To Call It Dope,” a Gil Scott-Heron flavored freestyle over bongos and muted samples.

The blaxploitation-based jam, “Live and Undrugged Pt. 1 & 2,” signifies the album’s midway mark, starting off as a solid and structured poetic attack and then collapsing into a frantic freestyle as the band explodes into free-form noise. “Thin Line Between Law & Rape” adds some reggae to the mix and the filler track “I Ain’t Mad At All” brings back the choir. “Death Of A Carjacka,” a satirical bit backed by church organ gospel, features a skit where a car self-destructs after being stolen. The thieves are of course trapped in the car, alive to see their demise.

“I Stand Accused,” the album’s second single, features Chuck D in perfect form. His voice booms over the smooth, trumpet-accented beat and his flow is absolutely bulletproof. It’s a perfect hip-hop track from beat to execution. It’s the very reason that Chuck D remains as distinct a voice as he is in hip-hop.

Flav borrows a hook from the The Last Poets for a song called “Godd Complexx,” and then the guitars kick in for “Hitler Day,” a critique of America’s willingness to celebrate Columbus Day.

Included in the album is a phone call from Harry Allen, long-time associate of Public Enemy, where he describes in 1994 the imminent change that the Internet will have on the exchange of music. It’s an interesting bit of audio in that it became a big platform for Chuck D, as he is a vocal supporter of music downloading.

Ending the album is “Living In A Zoo (Remix),” a fairly calm track as it’s simply one beat and one looped sample of “say hell yeah.” After exploring all the various avenues in black culture’s impact on music, PE end the album with an old school rap song, bringing its inspiration full-circle.

Coming after albums as solid as PE’s first four, it’s really no wonder that this album was as ill received as it was. Trends aside, politics aside, no critic or casual listener took the “Muse Sick” part of the album to heart. Muse Sick-N-Hour Mess Age is a celebration of music. I don’t believe it was meant so much for raising consciousness as it was meant to try and expand hip-hop’s boundaries by actually using its influences. Since the album’s release, many hip-hop groups have similarly gone the way of the instrument due to the intricacies of buying song rights and maybe infusing something new into their sound. It was a bold move on the part of PE. It was as bold as Miles Davis when he took Sly & The Family Stone as his template for what he was going to do next. The results: some people got it and others didn’t. PE fans wanted more Fear Of A Black Planet and Miles fans wanted more Kind of Blue. Sometimes it takes a while for your fans to grow with you. But, they usually come around. Hopefully in the case of Muse Sick-N-Hour Mess Age, fans will give it a second chance and realize what they’ve been missing.

Sincerely,
Letters From A Tapehead
chuck d funk hip hop jazz to whom it may interest

Anonymous said…
I have to admit that I missed the album also when it came out, completely overwhelmed by G-Funk and his promises of "a whole new era."

It's sad though, it sounds like this album was compeltely and totally ahead of its time, a sad harbinger of a hip-hop and political atmosphere that was to come; a trumpeter shouting "don't stand down" in a time when the majority of the American music listenership wanted nothing more than to just feel good or similarly feel bad (in other genres) about the horridity of suburban middle-class life.

And if there's anything that Chuck D does (and continues to do), it's that he calls em like he sees em and doesn't pull punches on the moronity he finds.