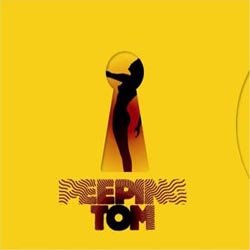 I’m very behind on my review of this record. In all honesty, I’ve rewritten this review about four times and thought about very little else for the last three weeks. Mike Patton, quintessential embodiment of all that is anti-Pop has come up with something that makes very little sense:

Patton made himself a Pop record.

Now, to understand how uncharacteristic this is of Mr. Patton, one must understand the colorfully loud, vastly chaotic and purely independent output that he is known for. Having tasted life in the illustrious Top 40 almost twenty years ago with Faith No More’s played out musical misnomer, “Epic,” Patton has since molded himself a career mostly devoid of MTV and radio. Since his seminal and accessible days in Faith No More, he’s been traveling musical avenues as varied as Frank Zappa’s legacy, hitting metallic high notes as screeching loud as any longhair with a flying-V and producing beats as BOOM-bastic as any back-alley DJ from the Boogie Down. And he’s been doing it all through online promotion, concerts and his DIY record label, Ipecac Recordings.

Peeping Tom is almost contradictory in its existence. Containing music as seemingly radio-friendly as any over-priced cookie cutter in a cracked jewel case, it’s tough to imagine that he would do something like this on purpose. Its sound is relatively close to Dan The Automator’s hip-hop-based and sultry Lovage, but Patton’s involvement there was strictly vocal. Here, he’s making all the moves so what’s his fucking motivation?

And then you hear it: At the end of the album’s first single (Can you believe it? Patton has a single! What the fuck!?!), “Mojo,” Patton states “Oops…I did it again.”

The idea that Patton could take such an unfortunately well-known turn of phrase and put it on one of his records is at first disconcerting. Why would he add a phrase like that to an already accessible mix of songs like this?

But, there’s more to his inclusion of that phrase than meets the ear. The idea that he himself played the roll of peeping tom, on the outside looking in at the plastic and attractive world of Pop, taking notes like some musical Diane Fossey, doesn’t seem too out of the question once you realize what you’re listening to. It’s inspiration from a world of studio percussion, solo records with guest lists so expansive that the headliner seems secondary, silly song titles, accentuated sexuality that sweats lust, a music video, a single and even guest rappers. Some of it even turns up the Nü. Patton evidently took a lot from that phrase and used it to base his anthropological journey into a world that he usually shuns.

Peeping Tom is the type of thing that would’ve made Andy Warhol very happy. Similar to Warhol’s silk-screened canvas, Patton breathes new art into a commercial sound, meticulously adhering to the “rules” of the genre while adding those little touches that only he is capable of making. The results offer at least some idea of what Pop sounds like when it isn’t being handled by industry darlings or soda endorsements. It also provides a little insight into why sometimes Pop doesn’t burst as quickly as its eventual namesake. It’s catchy. This record boasts smooth production, beautiful vocal work and goes one-step beyond conventional Pop by building itself an atmosphere. In today’s rather shallow radio-scape, Peeping Tom isn’t only a look from the outside in, it’s also a hint you can take notes and improve a formula. It essentially squeezes the life out of any excuse as to why mainstream music sucks as bad as it does, proving that all it takes is a musician with some determination to makes things a little better for our ears. Those of us who give a shit anyway.

With an impressive list of co-conspirators, various musical hotshots and eccentrics, it’s a wonder that the album isn’t all over the place but Patton manages to keep it all unified. The percussion mixes studio beats and effects with live instrumentation throughout, creating a sound too loud and raw to be purely manufactured. Its feel is mostly trip-hop, here and there adding middle-eastern rhythms (“Five Seconds”), bossa nova-flavored sway (“Caipirinha”) and straight-up rap (Kool Keith rocks the mic for “Getaway” amid buzzing bass noise).

Patton is ever the vocal craftsman, expressing his usual range with ease sans his propensity for screaming and rapid-tongued scat. He expresses a notable versatility in the “Don’t Speak”-esque, “ Your Neighborhood Spaceman,” a song that interestingly pinballs from sorrowfully emotional to abrasively confrontational. Patton also harmonizes Massive Attack’s “Kill The DJ,” supplying quiet seduction and loud desperation into its atmospheric poise.

The album finds its libido in the album’s single, “Mojo,” aided not only by Patton’s seductive vocals, but also by eerie violin and Rahzel’s and Dan The Automator’s percussion. Also high on the sexuality tip is the rather tasty “Sucker,” featuring Norah Jones in the unconventional roll of enticer. Not to be juvenile, but it’s really hot to hear Jones croon “motherfucker” like some modern-day Mae West.

The beat is turned up for “Celebrity Death Match” which finds Kid Koala on the turntables while Patton humorously name checks celebrities throughout. “How U Feelin?” and “Don’t Even Trip” play up the hip-hop’s influence on Pop and then the album finishes with Dub Trio’s “We’re Not Alone (Remix),” the one song closest to Patton’s familiar association with rock. The original version of this song is available on Dub Trio’s latest, New Heavy, and also features Patton.

Objectively, as an album, Peeping Tom is not necessarily a four-star achievement, but its existence is almost heroic. Knowing that music’s sad and pathetic state will only get worse as long as mediocre bullshit keeps filling the airwaves and the damaged ears of millions of kids with money to spend, it’s going to take musicians to sweep away the debris and get back to creating. Patton’s Peeping Tom is a step in the right direction in that it disguises itself as what the kids are listening to these days, but has the potential to lead its listeners somewhere they’ve never been. It wouldn’t be out of the question for someone to be listening to this and be exposed to new music through it. Patton’s eclectic output aside, Dan The Automator, Rahzel, Massive Attack, Odd Nosdam, Kool Keith, Norah Jones—all these groups and performers could potentially lead any new appreciator to something new. It has potential. All it needs is a couple budding minds to take hold of it and let it take them somewhere. We’re all now on the outside looking in, and all we can do is watch…and hope.
ipecac mike patton trip hop

Anonymous said…
Delicious! I'm definitely going to have to pick this up, and I'm not just saying that since I heard "Sucker," I didn't know there were flavors of Massive Attack and Rahzel through the album, and Kid Koala's turntable stylin's!

It's odd sometimes how close you can get to the border of pop and still stay good, isn't it? Or is that statement antithetical in itself, given the conclusion? Maybe it's a lesson, pop music really doesn't HAVE to suck if you pay attention to how you make it. Kind of like fast food-it can be good and good for you at the same time if you make it right! :)

Seriously though-I'm really impressed at the blend of sounds and techniques it looks like is on this album. Here's to it, and great review!
7/13/2006 3:55 PM

Yeah, the album is totally worthwhile, bro. Just about anything Patton touches is pure gold. I do feel that this particular album makes a bold statement about POP in general and confirms that even POP can have a soul. It doesn't all have to burst like a wad of BubbleYum.

Anonymous said…
Came over from Livejournal.

You have an interesting perspective on music and a thoughtful voice. Have you thought about writing for a living?
7/21/2006 1:53 PM

Thanks very much for the comments.

I'm not sure I'm actually good enough to do this for a living. For now, it's a hobby but if something grows out of it, that'd be great.