To Whom It May Interest #3: We Loved Him Madly 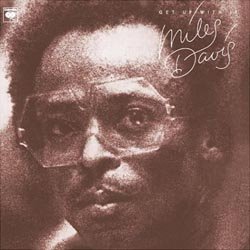 A couple years ago, I was browsing through rows of used CDs at the local record store, trying to ignore the fact that it was hot as hell and there was no air conditioning. Every cracked case held something I couldn’t have cared less about. I don’t remember actually looking for anything specific I think I was just trying to find something cheap that looked half way interesting. I was about ready to leave, when I found a copy of Miles Davis’ Get Up With It, an album I knew nothing about. It was a Japanese import and about $8. That was enough to warrant purchase.

Anyway, I got into my car, unwrapped the first disc and put it on. Within five minutes, I was asking myself out loud, “Where is this going? Do something, will you?” The record’s first track, “He Loved Him Madly,” is 30+ minutes long. The first ten to fifteen minutes consists mostly of eerie organ, sporadically plucked instrumentation and the most random drumming. There is no structure at all, just a sad and sleepy mood. Impatient, I wrote it off as a bad purchase, and pulled it from the player.

For some reason, maybe an hour or two later, I went back to it and listened to the track again. And then I listened to the rest of it. Then, over the course of the next month, it was all I listened to. I’m not really sure why because, on the surface, it’s not a good record. It’s overlong, at times annoying, at other times very repetitive and overall seemingly meaningless. It would most definitely suck to see played live. But, I fell in love with it and kept listening to it. And, now that I’m fighting a headache, it seems like an opportune time to write about it.

Get Up With It, down to its grainy cover, a photo of a somewhat introspective looking Miles donning space goggles, is about two hours of absolute grey. It doesn’t venture into the realm of anything uplifting, nor does it really plunge into the negative. It stays within the confines of some sort of musical purgatory, wherein it seems to express frustration, remorse, exhaustion and even the subtlest of agonies. Its songs just get tired and stop, providing no outro or big finish. Dedicated to Duke Ellington, who died the year this was released, Get Up With It lets on the Miles was not in the best of places at this time. His records weren’t really flying off the shelves anymore and his health was becoming a problem. A year after this record was released, he retired until 1980. The contents of Get Up With It were recorded between 1970 and 1974, and pieced together by producer Teo Macero.

“He Loved Him Madly,” the track that initially turned me off, is the album’s gem. Beginning with the quiet doom that I described earlier, “He Loved Him Madly” works as a biographical, and perhaps spiritual, study of Duke Ellington’s legacy. It’s a similar take on Ellington’s renowned “Black, Brown and Beige,” which was his musical journey into the development of African American history. After it’s seemingly directionless introduction, “He Loved Him Madly” finds a quiet rhythm, layered by Miles’ trumpet and David Liebman’s beautiful flute over Al Foster’s percussion. It’s easy to get lost in its atmosphere as it’s more of a prayer than a song. It’s peaceful enough to allow a mind to wander and it was probably meant for its listeners to think about Duke.

Following “He Loved Him Madly” are “Maiysha” and “Honky Tonk,” both of which add a little more pep to the non-caffeinated coma that you may find yourself in after a little more than 30 minutes of meditation. “Maiysha” features Miles on both the organ and trumpet, the former being his more utilized instrument of choice. “Maiysha” plays like a tropical island on a rainy day, emoting sequestered relaxation. It feels content in its lethargy. “Honky Tonk” playfully screws with the traditional sounds of country music by adding jazz’s improvisational twist. Mahavishnu Orchestra’s John McLaughlin strums along while Miles’ trumpet boldly blasts the tumbleweeds into the uncomfortable and unfamiliar city streets.

When “Rated X” begins, it’s a shock to the system. Over the heightened air of urgency and Mtume’s rapid African percussion brought about within the first couple seconds, Miles furiously presses the organ’s keys ‘til they scream or bleed. There is so much pain in “Rated X,” it’s frightening to listen to. Fast paced and relentless, even when the band periodically stops Miles continues to hit those keys for long stretches of time. There is no relief until the final notes of the organ peter out and you’ve reached the end of the first disc.

Disc 2 or, if you want to get technical, side 3 begins with “Calypso Frelimo,” another 30+ minute jam that seems to continue the nervous energy brought about by “Rated X.” It’s fast-paced, but nowhere near as excitable or maniacal. Conga drums are continuously heard under Miles’ sporadic trumpet and organ while Leibman’s flute works to relieve some of the tension. At about the half way mark, the percussion relents and the bass line slows to a crawl. At this point, the wind instruments interact while Reggie Lucas strums his guitar and adds some very amplified dissonance. Miles taps a key here and there but only really reappears with the speed once the interlude is over.

“Red China Blues” provides a platform for the trumpet playing Miles is better known for. Over a mix of brass and 70s funk, Miles pushes notes out like he was living out his yesteryears.

“Mtume,” named for the African percussionist present on four of this album’s tracks, is a very repetitive and unstructured mix of congas, heavy-handed drumming and random organ noise. Fusion meets funk meets Africa meets free-form jazz. Toward the song’s closing, the mix grows more anarchic and sports a horror-inspired synthesized whine that only adds more darkness and chaos.

The album closes with “Billy Preston,” a light and somewhat high-spirited funk jam. Billy Preston does not appear on the song though. I can only guess that its creation was intended as homage to the fifth Beatle himself. Relative to the album, “Billy Preston” ends things on an upswing.

I’m not sure how you critique jazz music. It’s not as straight forward in its delivery as rock or hip-hop. It’s not as easy to understand as pop or techno. It’s got more musical liberty than blues and more soul than today’s R&B. It has a boldness that no other musical genre has in my opinion. So, all you can really do is talk about how it makes you feel. At least, that’s all I can do.

Get Up With It demonstrates that human emotion isn’t necessarily all about highs and lows. Sometimes, what you should focus on is how you get to those highs and lows. That’s what therapists look for and chances are that’s what he was dealing with: The Birth of the Problem as opposed to The Birth of the Cool. He doesn’t explain what it’s like to be sad, but how you get sad.

I’m not going to bother employing tired phrases like “ahead of its time,” even though it is, but I will say that it’s a fascinating album. It may take a couple listens to grab hold but, once you get there, it’ll be worth it. Just make sure you’re in the mood when you decide to Get Up With It.

Sincerely,
Letters From A Tapehead
fusion jazz miles davis progressive to whom it may interest