As The World Burns, My Ears Ring: Youth Is Truly Wasted on the Young 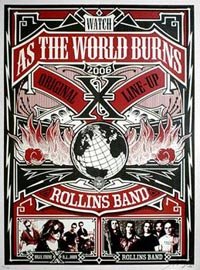 I could go on and on about how fantastic last night’s show was, how unbelievably on-point the bands were, how great the set list was…eee tee cee. But, I’m not going to. Last night, to me, was more depressing than it should have been despite the fact that I was immersed in ultra-rock the likes of which this century has yet to know in its newest musical offerings. It was like a requiem for the new millennium. You’ll understand why in a moment.

Rollins Band, bringing back its line-up of 1993, (the first line-up I ever saw might I add), was the full-on rock machine I’ve known and loved for many years. Rollins, somehow looking five years younger than the last time I saw him, was pulsing with face-rouging blood and energy, savagely attacking the crowd like we all owed him money. Sim Cain, annihilating his drum kit, provided obscene drum solos and sections that only prove the band’s incorporation of jazz rhythms while Melvin Gibbs, head exploding in an octopus of lengthy tendrils, loudly employed the funk that he’d brought to this unit 13 years ago. Chris Haskett’s guitar work had not shown any wear or tear. This band sounded like they’d been frozen in time despite the age defining lines that creased their faces and the graying hairs that pepper their heads. Whipping out songs as old as “Burned Beyond Recognition” and as unfortunately memorable as “Liar,” Rollins Band’s set was a testament to what makes them great: The refusal to grow old and get tired.

X only countered the punch. John Doe and Exene Cervenka grooved together like they had twenty-six years ago, not sounding any different than any X record you’ve heard. Doe’s bass added incredible bottom to Billy Zoom’s precise rockabilly guitar work.

Exene looks like your buddy’s cool mom or something. She’d dance and sway like a young girl in the meadow, with her head tilted upward like the sky was raining on her face. Her voice was amazing. She managed to rock “I’m Coming Over” and “We’re Desperate” like she had over two decades ago.

DJ Bonebrake and John Doe kept the rhythm strong the entire way through the set. “The Unheard Music” and “The Hungry Wolf” were spectacularly rendered, much to the delight of the crowd. Or just mine.

It was awesome to finally see X play. They’re set seemed to end as soon as it had begun, having plowed through it with fun intensity. I doubt that it was much different seeing them in the 1980, other than the obvious age difference.

After buying a poster, my brother and I took off, feeling great about the show and tragically pensive about the state of music.

Now, I’m not trying to come off like a music Nazi, shunning all who don’t seem to agree with my take on what’s good and what’s bad. But, and this is undeniable, we find ourselves in an interesting turn of events where the generations have pulled a switch-a-roo. When have you ever known a generation’s children to be so seemingly satisfied with whatever they’re fed? The children of the punk rock/hard core/heavy metal generations are criminally missing the mark, mistaking this gross and disturbing falsehood disguised as rock n’ roll for something true. What I saw last night, well me and a couple other hundred people ranging age-wise from 25 to 50, should not have happened. There’s no way I should’ve seen mid-forties rockers coming off as strong as they did, essentially blowing any new-fangled rock act out of any water the Earth houses in its many cavernous depressions. And there will honestly never be a reason for X or the Rollins Band to be worried about the yung’uns coming around and taking the reigns from them, knowing how tired and commercially motivated marketing churns out these newer bands with ease.

I feel sad for this generation, but not that sad. They are partly at fault. They let themselves be lied to, swept into this shitstorm of cookie-cutter rap music, insincere R&B and pussy-whipped swill desperately trying to mask itself as goth or punk or metal. They allowed self-serving and egotistical bullshit like “American Idol” determine who America’s next big star is. They allowed MTV to assume media-like control over what’s new and exciting in their played-out mass market of downloadable ring tones and videos. They allowed models and actors to enter a studio and leave the rest of us in absolute dismay as Hillary Duff, Paris Hilton and Lindsay Lohan sang their pretty little hearts out about living lives of superficiality, privilege and excess. Now THOSE are albums that are worth buying.

It’s all the same shit. Realize that, please. You kids deny yourselves the wonderful opportunities presented to you with the super-fast communication capabilities you now possess. You don’t have to work THAT hard to find it or make it anymore. So, start doing it. Find the underground networks, find the independent record stores, find the roots, find blues, jazz, punk, prog, classical, world…whatever your deal, FIND IT. Make music matter again. With the world at your fingertips, you have no excuse not to get out there. I wouldn’t want you to rob yourselves the glory of having your generation tied to something as phenomenally wonderful as Los Angeles or The End of Silence. Don’t you want to have your own Sgt. Pepper? Don’t you want your Dark Side of the Moon? Isn’t it important for you to be touched by something timely that you can relate to that isn’t fucking T.I., Rhianna or Panic! At the Disco?

Some people ask what’s wrong with these kids today. If they were to ask me, I would state that I think they’re simply old before their time. What a waste.

I think you are missing a great deal here. Yes, there is a lot of trite crap out there, but there are also a lot of really great, really innovative bands that are not getting mainstream press, but are still making amazing music.

Did you ever think that maybe you are holding on so long to your old favorites that you are not even giving today's music a chance? I mean,Rollins and X - their heyday was what, 15 years ago. You can't tell me that since then, good music has stopped being made.

Wilco, Decemberist's, Bloc Party, Flaming Lips, VHS or Beta,The Weakerthans, Sufjan Stevens, Snow Patrol - have you heard any of them?

There are actually a lot of newer bands that I very much enjoy. This article's tone was mostly due to a rather passionate conversation I was having the night of the show and it resulted in this rant. Seriously, my fingers flew through this article in the space of a half-hour, which is not something I usually do. Having said that, it was unfair of me to write off a whole generation based on my recent overdose of pop culture and video television. You're right: Good music will never stop being made. For that, I apologize.

In terms of the bands that've had their heyday decades ago, I admit that I have a lot of admiration and respect invested in them. They are essentially the yardstick by which I measure any music, new or old. But, I don't think that my old favorites have kept me from trying out new music. I'm more inclined to think that my old favorites have kept my ears sharp and my perspective somewhat sound. After all, it's important to know where these glorious sounds come from. Or, maybe I'm giving myself too much credit. ;)

Either way, I really appreciate your comments.