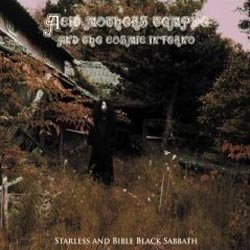 Seriously, I picked this up because I thought the album title was cool, but I had no idea what I was in for.

Obvious in their allegiance to Sabbath and wildly plugged into the nuances of the mighty DRONE, Acid Mothers Temple delightfully throw you head first into a vacuum that you may never find your way out of.

This album, whose contents only provide two tracks, is excessively drawn out and excessively murky. The 34-minute title track is a reverberating mass of riff carnage that tackles the air like a swarm of something loud and deadly. Swirls of science fiction noise whip and blip while an incomprehensibly distant vocal wallows through the roar like its lost in a swamp. Midway it speeds into a Motorhead-inspired jam, but the murk doesn’t allow for any guitar solos to hold up. They wind up following the vocals, and never going anywhere.

“Woman From A Hell” continues the Motorhead trend, but the speed doesn’t seem to work its way through the sludge. It was probably a conscious decision on Makoto’s part to make the album sound like it was recorded in a fish bowl. After all, these songs were recorded at the Acid Mothers Temple, so I guess the implication of vast and cavernous acoustics are the name of the game, but man…

Somehow though, I’m intrigued enough to want to grab the rest of the their discography. I’ve listened to this album a lot since I picked it up earlier this year and it does get into your head. There’s something there. I’m just not sure what yet. 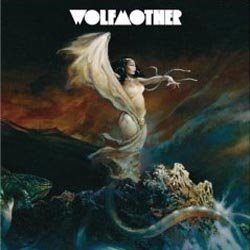 So, a four-way that can only be described as magical occurred:

Robert Plant, Jimmy Page, ”Geezer” Butler and Bill Ward exchanged vows and, of course, bodily fluids. This unholy union in the house of the holy consequently brought about the conception and birth of Australian rock trio, Wolfmother, whose first living cry outside its amniotic dwelling sounds aloud just before the heavy-handed slam of the opening, “Dimension.” From there, the young apple doesn’t fall too far from its elder tree as it revels in full-on Zeppery and Sabbathry.

Wolfmother’s self-titled debut does not shy away from utilizing the invaluable lessons of its influences. Lacing every riff with old school blues-born vitality, Wolfmother is a time machine, returning us all to the pre-punk arena days. Bass interludes and dissonant organ notes, heavy cymbal crashing and sludgy riffs; it’s a rock homage, respectful and grateful. The energy of album opener “Dimension” and blues rocker “Woman,” the bordering-rockabilly of “Apple Tree,” and the “Manic Depression” jazz syncopation of “Witchcraft,” (a song that even bravely enters Jethro Tull territory with some Ian Anderson flute play), all evoke the era-defining sounds of the ‘70s at its height.

Unfortunately, it also enters into some areas of the ‘70s that maybe need not be explored again. The progressive guitar notes and dramatic organ of "Joker & The Thief" really put the X in S-T-Y-X, though the song doesn’t necessarily disintegrate under the weight of its own flamboyance. “Tales From The Forest Of Gnomes” tries to find its own private Pink Floyd and marry that with some Cat Scratch Nuge, thus completing Wolfmother’s inevitable downward trajectory into 80s hard rock disgrace. It’s too soon to go Damn Yankees, guys. Okay?

But the down points do not detract from Wolfmother’s rock assault. There are licks to be heard. Licks as perked up as the mythological tits heaving on that categorically fantastic cover. All it’s missing is the elder wizard, hands raised to the lightning-veined sky above as his mouth quivers with rage, wooden staff connecting blazing white light while the crystal ball in the other fills with billowing clouds of smoke. Now THAT’s rock.

This is the second thing I have heard about wolfmother's this week. Must be fate teling me to check them out. Did you hear the review on NPR?

Funny opener by the way - lol.

Thanks for the comments. Glad I could amuse and enlighten.

I did not catch the interview on NPR, but I'm going to scour the net and see if I can find it. I really don't know much about this band other than that their album is really good.

As far as tracks to check out, "Dimension" I think sums them up pretty well. I particuarly liked "Witchcraft" also. Like I said, Wolfmother pull heavily from the Sabbath and Led Zep bag o' tricks but they do such a good job with the music. I think it's worth definitely worth a listen.

Anonymous said…
Hey man, when are you posting again? Is this site dead now?

The site isn't dead. I just haven't had the time to update. I'm getting married this week so it's been rather chaotic since the beginning of October. I hope to be back at it again soon though.

In the meantime, thanks for reading and I'll try and have something new up soon.