Rather Ripped for the June Series 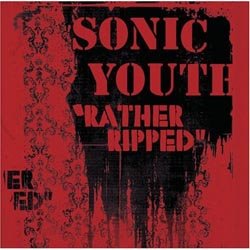 A month or two ago, I picked up a copy of Sonic Youth’s Rather Ripped during my lunch break. Intrigued by the DIY, Crass-based cover, not to mention the weird title, I wondered if this album was some sort of return to the sonic seeds that had long since germinated into their twenty-five year young career. Back when “Youth” had some truth to it. But, it wound up being the third in a series of SY albums that basically states, “Yes, friends...our best years may be behind us, but we still have a lot to offer.” Think of this series as a postscript, possibly an addendum, to an otherwise solid and ballsy avant-legacy that is now content in making music for music’s sake. It’s like they’ve found their inner-McCartney.

Rather Ripped, 2002’s Murray Street and 2004’s Sonic Nurse, have worked to further Sonic Youth from the experimental noise jams that they’re typically known for, their last foray into that world of chaotic static and hyper-stylized beat poetry being 2000’s NYC Ghosts & Flowers. The feedback still sits mightily alongside their melodies as they pay their respects to it and all the dissonant gifts it’s bestowed them, but remarkably the most prominent aspects of their latest releases have been the guitar work. The fret play found on these last three records is delicate, intricate and quite beautiful. Not that this is really anything new from Sonic Youth, (the solo that breaks out during Goo’s “The Disappearer” still gives me chills), but it does seem to present itself more consistently now as their device. 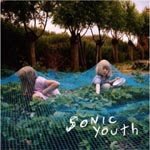 So the “June Series,” being that all three records came out every June for the last 4 years, begins with Murray Street, which is a nod both to the location of the studio space they’ve recorded in for many years. It also X’ed the spot for a rogue 9/11 airplane engine. The notable addition of Jim O’Rourke, who contributed an instrument or two in NYC Ghosts & Flowers, brought considerable depth to the Television-like jams that occur most notably in “Rain On Tin” and “Sympathy for the Strawberry,” the latter having a 3 minute intro before the vocals actually begin. Dipping a toe in the water with “The Empty Page” and “Disconnection Notice,” singer/guitarist Thurston Moore’s first couple tracks, you already sense a departure for them in terms of sound. It’s not an epic journey by any stretch, Lee Renaldo’s “Karen Revisited” weighs in with some thick sonic gasp and whine for a seven minute outro and Kim Gordon’s “Plastic Sun” is a quick marriage of off-key guitar strings and vocal chords, but accessibility does seem more probable for them.

“Radical Adults Lick Godhead Style” is a rather surreal and cryptic straight-ahead, strum heavy rocker that comes off like some sort of scene obit. It either serves to suggest the impending irrelevance that may befall Moore & Band, or as a poetic pat on the back to rock’s elders for beginning and ending for the sake of rock n’ roll.

This track reeks with a sense of nostalgia and maybe some curiosity about the mortality of Sonic Youth’s being and future existence. 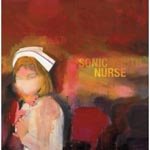 Sonic Nurse, at first, seems like the inconsequential middle kid that follows its older brother’s example too closely. It continues to delve into SY’s preoccupation with guitar strings, light feedback and mellow output, but the album seems very formulaic, following Murray Street’s sequencing a bit too closely. Sometimes it even seems bored. The paint-by-numbers “Pattern Recognition” and the sleepy “Unmade Bed” and “Dripping Dream” fail to make much of an impression despite Nurse’s later tracks improving the mix a bit. In fact, it’s a rare case where the last half of the album makes more sense.

Things improve with “Stones” and “Dude Ranch Nurse,” the point where the band suddenly seems interested in the fact that they’re making an album. “Stones” picks up the tempo while “Dude Ranch Nurse,” my favorite track on the album, makes an emotional investment through some beautiful six-string intermingling and harmonics.

Lee Renaldo, refusing to completely abandon his prosaic and desperate odes to whatever the fuck he’s talking about, adds some eerie feedback and nervous energy with “Paper Cup Exit.”

The album’s last two songs, “I Love You Golden Blue” and “Peace Attack,” are softly rendered ditties that probably shouldn’t have been sequenced together. “Golden Blue” opens with a slow uproar of ambient feedback and rolls into a slow jam while Gordon crackles her way through the song. “Peace Attack” has Moore reemploying the slow jams that occupied most of “Rain On Tin,” closing out the album with too much subtlety.

But, the series finds its footing in Rather Ripped.

Despite Jim O’Rourke’s absence this time around, Sonic Youth manage to gain a depth that had not necessarily eluded them previously but definitely comes off much more naturally. Maybe “less is more” holds weight.

Starting things off with the high tempo and sublimely raw “Neena” and “Incinerate,” SY exhibit some beautiful string play and percussion. Thurston Moore’s “Do You Believe In Rapture?” adds some innovation to the mix, utilizing guitar harmonics as the song’s base. Percussion and feedback enter the picture in spots but only to carry the bridge and the outro to fruition. For inventiveness alone, it’s probably the strongest track on the album.

“Sleepin’ Around” and “What A Waste” keep the upbeat guitar work and percussion in full swing and then Kim Gordon finds some lovely melody in “Jams Run Free,” despite her voice being rather challenged in that area. She also finds in Lee Renaldo’s “Rats” a great platform for some very exceptional and funk-laden bass work. Renaldo keeps his desperate vocalizations intact, while Moore and Steve Shelley work in some jazz-influenced syncopation.

The rock half of the album is calmed by “Turquoise Boy,” which erupts into a high-intensity noise jam at the song’s center. “Lights Out” is an inconsequential piece of mid-tempo filler that still boasts some solid guitar work. High and dissonant notes are plucked on “The Neutral” and then “Sympathy For the Strawberry”’s long intro is revisited for “Pink Steam,” which hits some heavy and emotional strings before Thurston Moore sings his piece.

“Or,” the album’s closer, lightly thunders along as Moore sings through sporadic strings. The song fades to a close and the series is finished.

Rather Ripped, by itself, stands out as remarkable proof that the best years aren’t necessarily behind Sonic Youth. It’s easily one of the best records of their career. As a third installment to this series, Rather Ripped is essentially the culmination of their previous efforts, sequenced nicely into twelve tracks that allow their departure from the overtly esoteric to stand strongly with their more avant material.

For any new listener, I would definitely go back and dig into their past for Daydream Nation and Goo especially. In the meantime, this series awaits to enthrall. If they decided to end it all tomorrow, they’d be leaving on a good note.