Better than TV or the Radio… 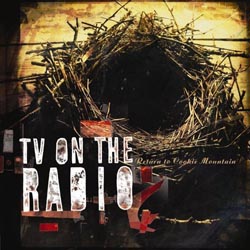 TV On The Radio
Return to Cookie Mountain
Interscope
Released 9.12.06

Media is one thread of humanity that we all share. As much as we may love or hate television, we’ve all seen the same shows, watched the same news program, caught the same commercials. We all buy advertised goods, believe paranoia-inducing news spots on the potential dangers of cell phone radiation, and somehow get involved in celebrity break-ups. Television’s glowing realities are viral, nesting into brain cells and creating legions of channel surfers that always, ALWAYS, have something to discuss the next day over stationary water coolers and coffee makers. The same can be said for radio, whose monotonous and unimaginative playlists only accent the DJ’s morning banter which, a lot of times, is about what they saw on TV. Not to say that television and radio rarely inform, but their rafts of often mind-numbing programming are sought and uploaded with gusto, overtaking a large percentage of the human experience.

You have to wonder why intellectually based art rock bands like Television and The Talking Heads, two vital groups to rise to prominence during ’77’s musical colossus, would purposely don names that relate to such a vacuous device. Irony is probably the reason, but there is also something to be said for humanity’s aforementioned common thread and the television’s widely known name being related to something artistic.

Similarly, New York-bred TV On The Radio, cleverly advertise the juggernauts of mass media, only to change its purpose by impregnating it with art. It’d be false to state that intellectualism and art in music have died, (obviously Radiohead have managed to corner that market as well), but it’s difficult to trace its path from the Heads ‘til now, where it seems to be on short order.

Return To Cookie Mountain, TV On The Radio’s second album and first with Interscope, forms brilliantly layered soundscapes that rely on abstract musical concepts and funk rhythms. Headphones only exist because of albums like this. The vocals, mostly sung in unison between band mates Kyp Malone and Tunde Adebimpe, are the primary element to every song and mix the high-pitched essence of Smoky Robinson with Brian Wilson’s harmonic textures. A lot of times the verses almost sound improvised, finding unique inflections at odd moments in the songs but never sounding wrong. It comes off like either beautifully sung beat poetry or very passionate Motown.

Though seemingly minimal, TV On The Radio experiments with a wide array of instrumentation and electronica, managing to rewrite the traditional sounds of psycadelia, most notably with the orchestral samples employed on the opening track, “I Was A Lover” and the vast fields of noise produced on the almost dancey, “Playhouses.” Following the album’s opening track, “The Hours” subtly heightens the album’s tempo, bringing horns and piano to the mix:

That line has been in my head for a month.

David Bowie guests on the beautifully piano laden, “Province,” adding his Brian Eno and pop associations to an album that clearly takes his invaluable lessons very seriously. In fact, bringing back the Talking Heads for a moment, TV On The Radio could easily be the modern day synthesis of Eno’s work with the Heads and Bowie. They combine the ultra-orchestral vision of Bowie’s Low with the world music influence and funk of the Talking Heads’ Fear of Music and Remain In Light. But they add a current spin by not shying away from, while not overusing, the sampler and the synth. The result is a masterpiece for the now and a fresh and innovative variation on pop music. Bowie’s presence here is appropriate in more ways than one, and indicative of TV On The Radio’s potential as both an alternative AND mainstream powerhouse.

“Wolf Like Me” is the album’s most accessible track, providing the album with its only real straight-ahead rocker. “Method,” definitely birthed from the Beach Boys school of harmony, functions almost solely on percussion and vocals. Adding strum-heavy guitar noise to the anthemic “Let the Devil In,” a choir of voices exclaims the song’s title over marching drums and bass. The guitar sticks around for “Dirtywhirl” and then the band expands on the traditional sounds of blues for “Blues From Down Here,” a fast-paced bit of funk that’s sung with preacher-like passion and spontaneity, which is reflected by the song’s use of multiple horns.

The beautifully sung ballad, “Tonight,” flows over echoed piano, defined tambourine and clarinet. The distinctive elements carve themselves out of the song’s dissonant background and almost sound alone in the audio expanse. It’s like the instruments are being played far away, like the song exists in a musical between five different people that happen to be playing the same piece of music in five different corners of the planet.

Part of me thinks that “Tonight” should’ve ended the album, but “Wash The Day,” hitting anthemic notes again with heavy vocals, celebratory drums and electric sitar, suits the album well as its climax.

My only complaint with Return To Cookie Mountain, and it’s a minor complaint for an otherwise flawless album, is the inclusion of four additional tracks. After 14 tracks consisting of 16 to 17 seconds of silence, (Just a note to iTunes users, these tracks reveal a hidden joke when you upload the disc to your computer.), a filler track called “Randomness,” throws in almost two minutes of studio noise and talk which is then followed by “Snakes and Martyrs,” a remix of “The Hours,” and “Things You Can Do.” The tracks are good, but they deviate from Cookie Mountain’s intended sequencing and add a different ending to the album. I would’ve liked to these tracks featured on an EP, maybe accompanying the CD as an interesting companion piece. But, I’m just being a picky bastard.

TV On The Radio is a band that the world of music desperately needs. Their highly intelligent and artful Return to Cookie Mountain is an album that restores hope that we haven’t seen it, heard it or done it all. The world of possibility still exists as long as albums this good can still emerge from skilled hands, heads and hearts.

Anonymous said…
You're not dead. That is good, because you have good things to say and I like reading your site. I have no money to buy new music now with xmas coming and presents to buy.

would you recommend this as a present for a so hip it hurts 16 year old brother?

Nope. Not dead. Not yet anyway.

A "so hip it hurts" 16 year-old, huh? If his tastes revolve around trip hop and electronica, I think he'll be into this. The album has bits and pieces for everyone and it's extremely easy on the ears. I personally think everyone should have a copy. You'd be doing your brother some good.

Good luck with the shopping and have a Happy Thanksgiving.

Anonymous said…
Bought it for the bro, if he hates it,i am putting all the blame on you, tapehead guy.

Good luck with the gift. I think he'll like it. If not, ah well. Did you check it out?

I'm not sure if we're ever getting back to Kentucky. I'd really like to see Louisville again though. I liked it there a lot. The record stores were great and parts of it were beautiful. I guess we'll see.