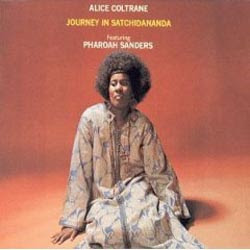 Sunday night, I heard the news that Alice Coltrane, widow of John, had died at the age of 69 from respiratory failure.

Alice Coltrane was a classically trained piano player. During John Coltrane’s exodus from convention and structure, Alice was at the keys, aiding John in his musical exploration. When he died of liver cancer in 1967 at the age of 41, Alice (then a widow at 30) continued to play with members of John’s group and went on a musical journey of her own. Having been heavily influenced by cultures in the East, most notably Hinduism, Alice incorporated these sounds into her playing and widened the jazz spectrum. Inadvertently I think she increased jazz’s relevance to society’s then-climate, the younger generations of which were turning on to enlightenment through drugs and Eastern religions. She also brought the harp into the mix, adding variety and stretching the boundaries a little more; boundaries that her husband was doing his damnedest to knock down.

Because she was such a wonderful musician and as strong a personality in jazz as she was, Alice Coltrane was never just the widow of John. She had her own voice and her own spirit. After almost 40 years, her and John are finally together. I can only hope that, wherever they are, there’s a lot of music.

Before her death, a CD was in the works that is still supposed to release this year called, Sacred Language of Ascension. Her last release, Translinear Light was released in 2004 on Impulse! Records and was produced by eldest son, Ravi Coltrane.

In honor of Alice Coltrane, I thought I’d write a little about the only album of hers that I’m very familiar with, Journey In Satchidananda.

When I bought this record, (probably six or seven months ago as I was only just getting into the Alice catalog) I didn’t know what to expect. I have a tendency to be a little cynical when it comes to the wives or offspring of musicians, as they typically never even come close to matching the real deal. For all I knew, I was buying a Yoko record. Instead, I got a bass-heavy mix of thumping percussion, driven by the constant drone of an ultra-sharp tamboura. The verses are addressed through Pharoah Sanders’s snake charmer of a saxophone and Alice picking harp strings like an avant garde angel. It almost rocks, but it’s too mesmerizing to bring about the wild child within. It almost enacts meditation, but it’s too strong to ride out on a lucid wave of disembodied enlightenment. There’s something felt: the soul of something pure and peaceful that wants to make itself known. Knowing the climate of the time, the year being 1970, Journey In Satchidananda could be a prayer for peace sung at the volume needed to grab an ear or two. It’s an opinion, but not an implausible one.

Alice brought together two ensembles to make this record: one for the studio and another for a live recording. This was actually her fourth record for the Impulse! label, so she had been building up some stock as a leading jazz musician. Her first ensemble, both of which feature Pharoah Sanders and Rashied Ali (two associates of Coltrane’s last group), laid down the first four tracks of the five-track album at the Coltrane studio. “Journey In Satchidananda” reveals itself slowly, beginning with a first step (Cecil McBee’s distinct bass line) while its surroundings reveal themselves (Tulsi’s tamboura drone and Alice’s harp). Pharoah brings out the words. Whatever poetry this journey inspires; he speaks it through his sax while Alice sings its chorus. This dynamic is also expressed in the second track, “Shiva-Loka,” though Rashied Ali finds more of an identity this time around. For “Stopover Bombay,” Alice revisits her beloved piano and carries that over to “There’s Something About John Coltrane.”

“There’s Something About John Coltrane” is interesting in that it’s the album’s departure track. It’s more of an homage to Trane’s Classic Quartet, with whom Trane created A Love Supreme, Crescent and a slew of other amazing records. McBee, Ali and Coltrane all do their best impression of the Quartet’s smooth rhythm section while Pharoah strives to bring Trane back to life for a minute or two. The only element that keeps this track in the album’s scope is the ever-present tamboura, droning along to witness the Quartet’s rebirth.

“Isis and Osiris” introduces the second ensemble. This track was recorded live in New York City on July 4th, 1970 and features Vishnu Wood on oud and Charlie Haden (associate of Ornette Coleman) on bass. Beginning with a bit of free form chaos, “Isis and Osiris” sounds like the quaint music heard during a village celebration. The oud is like a deeper variation on the mandolin, creating an other-worldly atmosphere of joy and dance. Pharoah’s sax sings at the climax and Alice’s fingers graze the strings once more.

I figure if the journey should begin with one step, it should end with celebration. Alice Coltrane, like her husband, searched for spiritual consciousness through music. It’s possible that Trane died before he could find what he was looking for. Alice, on the other hand, may have had enough time to find it.

To Trane and Alice: Thank you for taking us on your respective journey. I’m thankful to have listened and look forward to hearing more.

Sincerely,
Letters From A Tapehead
Labels: impulse jazz john coltrane rip to whom it may interest