If I were art & you were school, I might try to avoid you. 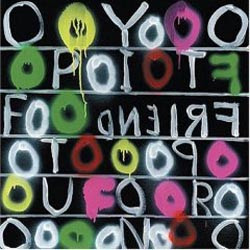 This record has been haunting me for the past couple weeks. I guess when you’re in a position to sell yourself as an opinionated know-it-all, as I try to do on a sporadic basis, it becomes daunting when faced with something as uncharacteristically strange an album as, Friend Opportunity, the latest offering by indie trio, Deerhoof. Why is it so strange? Well, try to wrap your head around how the background noise of any 80s era arcade sounds coupled with progressive time signatures, syncopated drum styling, fairy-tale trumpets and a vocalist that sounds like a teenage Muppet Baby with a penchant for magic mushrooms and Burroughs novels. In fact, this is one case where the album’s artwork perfectly illustrates the content herein: an imagination as rampant and full of wonder as any developing child, but disturbed as if that child talks to his finger and spells backwards.

Friend Opportunity is the strongest argument against art school and this is coming from someone who graduated from such an institution. I say this because there’s spontaneity to this album, the type that might not exist under the watchful eye of a trained professional with a lot of opinions. And it’s not that there isn’t thought or planning going into the songs Deerhoof puts together. It just feels very organic and unrehearsed. Deerhoof approach their material with a vision so non-jaded you can only imagine that their eyes still sparkle when they gaze up at the clouds. Personally, I’d like to sample their record collection and see where they draw their inspiration. There are definitely No Wave influences at work, but I would like a playlist. I’d probably buy every album.

In addition to the music, vocalist Satomi Matsuzaki’s surreal lyrics and high-pitched inflections are the cherry on top as far as Deerhoof’s sound. There’s wonder there, laced with innocence and a strangely self-assured naiveté that’s balanced by the more experimental aspects of the rest of the band. The urgent keyboard and rapid-fire percussion of the album’s opener, “The Perfect Me,” is a perfect example of how Matsuzaki’s vocals soften the song’s aggression. But, on songs like the poppy “The Galaxist” and the Disney-like “Whither the Invisible Birds?”, she manages to enhance these songs’ intentions by sticking to her formula. Somehow it works. I’ll be honest: at first I thought her voice was going to drive me fucking crazy, but it really doesn’t detract from the music. After a while, the voice only makes sense, especially when you allow yourself to concentrate on what’s going on behind it.

“Believe E.S.P.” essentially sold me on this album. Despite sticking to a simple foundation rhythm, Deerhoof add and subtract an abruptly manipulated array of “Lost In Space” sci-fi bleeps, cowbell percussion, horn and guitar sounds. The unpolished results are mesmerizing. Also straggling the avant are the key heavy “Choco Fight,” the marriage of garage guitar and “world of tomorrow” computer beeps in “Cast Off Crown,” and the free form and off-kilter jamming during the album’s 12 minute closer, “Look Away.” “Kidz Are So Small” is a strange musing backed by classical samples, electronic percussion and static. Think Cibo Matto meets My First Sony.

There’s much for the outsider ear, but it really doesn’t discriminate against the straight-ahead rocker. “The Perfect Me” and “81+” aren’t readily accessible in terms of straight forward rock criteria, but there are blues riffs and rock drumming to be found. Even “The Galaxist,” despite featuring some fairly progressive guitar and rhythm sections a la Mahavishnu Orchestra, turns up the distortion at points, spotting an otherwise smoothly rendered composition. “Matchbook Seeks Maniac” has the anthemic feel of something that The Jesus and Mary Chain might pull together. In terms of accessibility, this might be the most ear-friendly track, revelling in a feel-good moment before the album's lengthy climax. All together, there’s something for everyone though Deerhoof’s brand of No Wave and art rock run rampant throughout.

Friend Opportunity colors outside the lines, challenging the lengths that art and music can be tied together. And it does so with a fresh outlook that doesn’t seem discouraged by the seemingly limited avenues on which music can venture these days. I guess it pays to be positive and, well…imaginative.

Sincerely,
Letters From A Tapehead
alternative deerhoof no wave

Anonymous said…
Once again, incredibly well written review. I'm starting to read back and make myself a list of "must buy's" according to your reccomendations:)

Glad you enjoyed the review. If this album is any indication of how this year is going to sound as far as music, it's going to be a very good year.