To Whom It May Interest #7: LOVE, LOVE, LOVE — The Beatles are remixed

I love mixed tapes. Since my teenage years, I’ve enjoyed many hours at a time figuring out new song sequencing, selecting songs, making cuts and creating themes. Assuming the role of a producer, being someone that will never grace any switchboard or guide any band into creating a masterpiece, is probably its main attraction. For a couple hours, I’m bringing songs together in a format that hadn’t been initially intended, working only on instinct and expressing myself through another’s art.

The hardest mixed tape I ever made, was a Beatles tape. 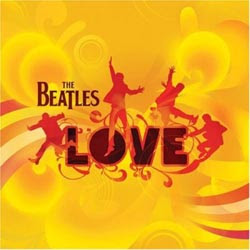 On one of my first dates with my future wife, I was employing my brand of “gettin’ ta know ya” questioning. To me, there’ve always been two types of people in the world: You got your Rolling Stones type people, and you got your Beatles type people. Granted, there are exceptions to the rule, but I’d say a good percentage of the people in the world are one or the other. I myself am a Beatles person. I’ve never been into the Stones, despite trying. Not to say that I don’t give them credit, but they’ve never affected me like The Beatles. The Beatles, to me, are…just…

…I could go on and on about how much I love the fucking Beatles. My brother and I have, in the past, immersed ourselves in a whirlwind of Beatle-speak the likes of which others discuss politics, religion, television, sports, matters of importance. Few things to my brother and I have ever mattered as much as the impact of a 45-second piano chord like the one that chillingly echoed the climax of a “A Day in the Life.” That being the case, when I popped this question to my now-wife, and she said “neither,” I had a mission. It was up to me to expose her to The Beatles properly. I went home and assembled a mixed tape with “This barely scratches the surface” scribbled on the label of side A and struggled with it for about three hours.

When you only have 90 minutes with which to explain one of your favorite bands on Earth, and you’re a dork like me, you more or less treat it with the same amount of care as you do handling dynamite. The Beatles’ catalog isn’t just a collection of songs: It’s an historical account of an era and the band that defined it. They’re sacred. Because of this, I was initially skeptical of LOVE, George and Giles Martin’s soundtrack for the Cirque du Soleil show of the same name.

LOVE is essentially a mixed tape, exhaustively assembled only through archival knowledge, creativity and the utmost respect. George Martin, the man who brought The Beatles to the world, and his son, Giles, have dissected each song and reassembled them into something familiar but strikingly new. From beginning to end, LOVE is fluid and mesmerizing. Check out “Because” being sung a cappella, or “Within You Without You” being sung over the trippy “Tomorrow Never Knows.” Check out how well the tremendous guitar sounds of “I Want You (She’s So Heavy)” fit in with the wild organ grinder music from “Being For The Benefit of Mr. Kite.” A lot of thought went into these decisions and that makes LOVE so much more than just a backdrop for some circus performers.

This album has become yet another conversation piece for my brother and I to chew on. Though our mutual fascination with the band’s music has only been enhanced by this exploration, this really isn’t a Beatles album. LOVE is a producer’s showcase. It’s The Beatles’ music, but its altered being is the result of shapeshifting, morphing and blending at the hands of a human Cuisinart gifted with jigsaw precision and a pair of headphones. The album is really only going to be appreciated by fans. Not to say that it dabbles in elitism, but this wouldn’t work to build new fans or showcase the actual talent of the band, which is what I tried so hard to do with my 90-minute cassette.

So, a skeptical question begs to be asked: Was it necessary to reconsider this music?

Probably not. It’s a question worth asking, but I’d be lying if I said that I didn’t appreciate LOVE for existing. Necessary or not, George and Giles Martin have created a thoroughly entertaining listen that takes interesting chances and respects the music.

Quote the Lennon nevermore: “All you need is LOVE” and a shitload of other Beatles albums.

Sincerely,
Letters From A Tapehead
george martin the beatles to whom it may interest

Anonymous said…
I'm glad you came around,told you it was quality. So out of all the tracks which do you think they did the best work with? I;m of the mind that the transition between Gnik Nus and Something is amazingly flawless.
2/05/2007 10:19 AM

I'm actually not sure which transition is my fave. The ones that I mentioned in the review stand-out the most, but I also really liked the treatment on "Eleanor Rigby" and the "Julia" transition.

Thanks again for that Loud, Fast and Out of Control set. It's awesome.

Let me say that it is an absolute honor to have you comment on my review and that it was also quite shocking to find out that you actually found this tiny spot on the ever-expansive internet. Your father's work with The Beatles has been an inspiration to me for years and your work on this album clearly indicates that you both share the same profound vision.

Thank you for stopping by. I'm glad you enjoyed the review.