I thought this was a Stooges album... 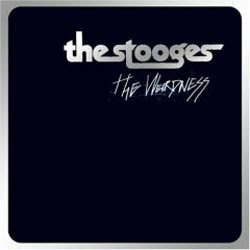 The Stooges
The Weirdness
Virgin
Released 3.07.07

In a little more than a week, Iggy Pop will be 60 years old. Consider this when you hear him push his throat to the max, showing very little wear and tear despite a career that would have a lesser man bibbed and broken, lips quivering as his nurse maid struggles to get a spoonful of strained carrots into his mouth. But, also consider this when you hear a lyric as grossly stupid as “my dick is turning into a tree,” (the album’s opening track, “Trollin’”) and realize that the big six-oh drove him to make that unnecessary observation. Hey, he can still rock, he can still get it up…The Stooges must still be amazing, right?

It’s 2007. Unfortunately for The Stooges, it’s not 1969 or 1970. Jumping off from a three-album legacy that brought alienation and hard rock to a new level of dismay at the hands (and ears) of rock critics and parents everywhere, Iggy and the brothers Asheton have come together to bring you The Weirdness: an unfortunate and bewildering catalogue of songs that dare us to listen without squeezing our T.V. eyes in agony. Trying to enliven The Stooges’ past reputation as the group that demanded danger when rock’s “bad boys” (The Stones) were yelping “gimme shelter,” Iggy boasts that “rock critics wouldn’t like this at all” in an attempt to convince us that he and his band of Michigan madmen are still deadly. And, it’s possible that they still are deadly. Y’know…when they’re on stage. Umm…and playing the old shit. The only danger present within this 12-song mistake is that its existence can only taint the band’s impact. And, it’s a realistic possibility once you hear a track like “Free & Freaky.”

Recruiting legendary bassist Mike Watt (Minutemen, fIREHOSE) to take the place of the late Dave Alexander, and bringing back Steve Mackaye, the free form sax player that added some layers to Fun House, the plan was to get back to their point of origin pre-Raw Power. Interestingly though, The Weirdness sounds more like Raw Power, Ron Asheton channeling James Williamson’s hot guitar licks as opposed to his own savage Fun House riffs. Producer, Steve Albini, goes relatively unnoticed here in his roll, as does Watt who is criminally under-utilized and so unimportant that he doesn’t even qualify to get his picture with the band.

Because the music is such a vast departure from the ear-splitting abrasiveness with which The Stooges of yore threw down, a lot of The Weirdness comes off like an Iggy-solo affair. He still digs the chicks (“Trollin’”), seems fairly self-congratulatory about his wealth (“ATM”) but fancies himself better than his fellow wealthy types (“Greedy Awful People”). He’s also been keeping up on his pop culture, name-dropping Dr. Phil in one instance. Of all the names to put on your CD, man.

“My Idea of Fun,” a riff I actually dig, almost gets it right. Where it screws up is that it’s actually an observation about society’s lust for violent entertainment. The song’s refrain “My idea of fun/is killing everyone” would’ve been cooler if it was about Iggy. It would’ve also been more of a Stooges song if that had been the case. “Mexican Guy,” an instance where Watt stands out, draws some of its percussion from the “1969” book of tricks (as they do on “Greedy Awful People,” but “Mexican Guy” is a better song) and helps sell the album a little more. The album’s gem is its title track, a slow jam starring Iggy in croon mode, provides a decent platform for Mackaye to push some air through his sax.

But, The Weirdness doesn’t only get it almost right. It also fails.

The aforementioned “Trollin,’” starting things off all wrong with comments about Iggy’s arboreal virility, vulgarly conveys the obvious in the most ridiculous of terms. “You Can’t Have Friends” is immediately forgettable and “The End of Christianity” succeeds at making no fucking sense. There’s an opening line about Iggy having the hots for a black chick and then it’s apparently the end of Christianity. Who knew?

But “Free & Freaky,” is so remarkable that it deserves its own paragraph. I would like to have been there to see Steve Albini’s reaction when he first set his ears on this disgraceful bit of clichéd patriotism gone completely…fucking…awry. I think Toby Keith’s American boot to the ass may have been more poetic next to this song and the fact that The Stooges name has anything to do with it is a crime. It really knocks the wind out of the rest of the album, which probably isn’t saying much but I’m trying to be diplomatic.

“She Took My Money” and album closer, “I’m Fried,” supply a couple decent riffs but…whatever. “Passing Cloud” just sort of happens, revisiting the slow/jazz/crooner formula, but the title track does it better.

To me, the true weirdness of The Weirdness is the seeming lack of enthusiasm and intensity with which the songs are treated. It feels half-assed and I don’t know if Iggy and the Ashetons were under a deadline or if they were just convinced that the fans would be happy no matter what. But, being one of those fans myself, I would’ve liked a little more out of them. The Weirdness, disappointingly, serves only to stain their otherwise spotless and seminal existence.