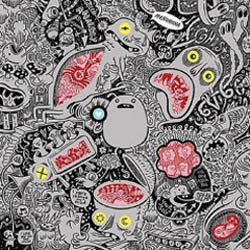 Throughout one’s musical explorations, one will figure out a few things. The first thing is that your favorite bands will fuck up somewhere down the line and release a shitty album. The second is that you’ll rarely hear an album you could label as perfect: there are always a couple tracks you could do without. Lastly, if you hear a perfect album, you better tell everyone about it.

So, here I am, telling you with all certainty: Friend And Foe is a perfect album.

Portland-based trio, Menomena, have done the unthinkable and injected a much-needed dose of credibility to “alternative” music by reviving what it originally stood for: the antithesis of everything MTV and everything radio. From its brilliantly conceived and executed packaging (thank you, Craig Thompson), to its musical inventiveness and confident experimentation, Friend And Foe willingly challenges the notion that it’s all been done before. Yeah, you can hear moments throughout Friend And Foe that may recall some 60s pop and garage nuance, or maybe some vocal inflection that evokes some 80s new wave hook, but the treatment of the material is so fragmented anyway that you wind up struggling to understand where it all came from. They’ve almost taken sampling to a higher level, lifting inspiration in jigsaw-shaped bits and peppering them through every song: small sax blasts, momentary guitar riffs, glockenspiel taps…all with adept musicianship. The only all-encompassing aspects of Friend And Foe are its penchant for heavy-hitting drums and lush piano. And, even better, they can recreate this effect live.

Beginning with the upbeat fuzz-guitar of “Muscle N’ Flo,” this song introduces the band and all the instruments herein, ending the track in a flurry of piano, sax and cymbals. “The Penguin,” a track that had me mesmerized the first time I’d heard it, is a basic piano/drum/guitar jam that truly throws down, Justin Harris’s voice possibly hitting Peter Gabriel territory. The keys are hit with as much severity as the drums here, ably taking the album up a notch before calming everything down with “Wet And Rusting,” which exhibits some beautifully played piano and provides a backdrop for interesting observations like “it’s hard to take risks with a pessimist.”

“Air Aid,” another favorite, adds a different mood to the album. It’s ponderous in tone, starting off light and then evolving into a hand-clapped collage of keys, sax and bass. It’s one of the more atmospheric tracks on the album, ending in an almost slower variation on the “everybody-ho-hah, everybody-ho-hah” climactic chant. “Weird” speeds everything up with an off-kilter beat and ever-present fuzztone in the background. High-whine guitar strings follow Harris’s hook and baritone sax. The song ends with unexpected mandolin strums.

“Rotten Hell” is really the only song on the album that sounds even close to being categorically “indie.” It’s steady piano and melancholy vocalizations tug at the Death Cab heartstrings a little closely, but the song saves itself by having just enough balls behind it to not completely wimp out. “Running” comes off like an involved intermission, clocking in at a mere 1:52, but still containing enough interesting ideas to hold up with the strongest tracks on the album. Following that is the emotionally charged “My My,” providing keyboardist Brent Knopf some time behind the microphone.

“Boyscout’n” and “Evil Bee” both could’ve been album closers, the former having a whistle-fused, “all together now” hook and the latter ending in some truly epic drum work and close-to-orchestral soundscapes. “Ghostship” sort of plays like “Running,” simplistically, but interestingly, providing a bridge to the next song without coming off lightweight. “West” ends the album perfectly with a thickly bass-laden slow jam which erupts into a wonderful musical upheaval that is paused momentarily before carrying on in a minute-long piano outro.

Admittedly, I’m not sure if this review even comes close to capturing exactly how good Friend And Foe is. It’s one of those things that you’re going to have to hear for yourself, keeping in mind that your ears will pick up something new the more you listen. Undoubtedly, Friend And Foe has the potential to become an alternative classic, confidently listing itself among the long list of albums that have made a difference. It’ll get its due. I only hope that Menomena can keep it up.

Sean Caldwell said…
It's definitely up there.