To Whom It May Interest #8:
Struggling To Understand The Smiths – Part 3: The Queen Is Dead 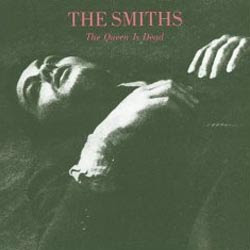 The Queen Is Dead. It’s been difficult to think of anything to write about this album, mostly because there aren’t many all-encompassing adjectives that I can apply to it. It’s not a simple record to consider, though if there be one characteristic that seems to spread throughout, that would probably be “discontent.” It wouldn’t be implausible to consider that The Queen Is Dead’s unsettling nature might owe more to the band’s then-tumultuous relationship (Apparently, a label dispute and exhausting tour schedule, not to mention the significantly large amount of music the band was writing in such a short time span, was beginning to have a negative impact on the band and would eventually lead to their break-up.) and less to their often smart-assed and critical views on society and politics, despite the overtly anti-monarchal album title and opening track. Morrissey’s reference to The Queen as ”her very Lowness,” sort of speaks volumes on its own, but doesn’t really add it all up into one easily obtained sum.

This is considered to be their best album and I would probably agree. With Meat Is Murder, I largely considered Johnny Marr’s guitar work and Morrissey’s words and very little else. This album seems to showcase bassist, Andy Rourke, and drummer, Mike Joyce, a bit more, as Marr’s riffs seem better integrated into the music. It might just be something my ears are picking up, but The Smiths do feel like they’re all on the same page. Well, musically they’re on the same page. Morrissey’s harmonies are really the superstar this time around.

Really strong and determined on the album’s opener, “The Queen Is Dead,” very sophistically insulting on “Frankly, Mr. Shankly,” and somewhat typically dreary on “I Know It’s Over,” Morrissey fills emotional shoes like a method actor and knows how to build his characters. Was Morrissey really such an enemy of The Queen, or was he just playing a roll, seeing the world through imagined eyes and exploring how someone else feels? The reason I don’t believe that he speaks from his own point of view is that he writes differently for every song: sometimes with biting sarcasm, sometimes with over-wrought sorrow, sometimes with a subversive’s passion. Despite that, he always carries a brooder’s inflections, which I think is his a simultaneous strength and weakness. But, his approach is that of a New Wave-Sinatra and that really makes him standout.

To get back to the songs herein, “Frankly, Mr. Shankly” is the type of song that could dwell in the grey matter for days. It hits below the belt against upbeat notes. “I Know It’s Over” is one song I keep coming back to. Yeah, it’s a dirge but it’s the type of song that softrockers have been trying to duplicate for years and have failed miserably, mostly because it’s really good lyrically. I particularly like ”It’s so easy to laugh/It’s so easy to hate/It takes strength to be gentle and kind”. I just like its honesty. Honestly.

“Cemetry Gates” is a witty rant against the so-called classics. At least it seems that way. Having myself fallen victim to excessive pandering by “experts,” (I haven’t been able to appreciate any Matisse paintings because of one ass-kissing tour guide at the Philly Art Museum) I can appreciate the song’s iconoclastic and somewhat condescending attitude. ”…Keats and Yates are on your side/but you lose/because Wilde is on mine.”

“Bigmouth Strikes Again” is probably the hardest rocker in the whole album, featuring some chipmunk-high backing vocals. Apparently, the vocals belong to Morrissey; the results of a sped up harmony he had recorded previously. “The Boy With The Thorn In His Side” and “There Is A Light That Never Goes Out” are both similarly constructed little ditties, both featuring acoustic guitar and mellow tempos. In between, rockabilly track, “Vicar In A Tutu,” wisely breaks them up.

If I had to pick one track that I could’ve done without, it’s “Some Girls Are Bigger Than Others,” a song that not only contains one of the dumbest hooks I’ve heard, but also comes off as half-assed. A really unimaginative riff from Marr layers the simplest of bass and drum lines. There were better songs to end the album but, alas, they chose this one. Luckily, the album’s strong enough that its climax doesn’t ruin it.

Though I don’t want to take anything away from Marr’s songwriting, a lot of The Queen Is Dead owes its success to Morrissey. His words and harmonies give the album its intelligence and emotional depth, despite the band being undeniably tight. The album’s production, courtesy of Marr and Morrissey, keeps all the instrumentation even. Weirdly enough, I thought Marr’s talent and songwriting chops were better presented in Meat Is Murder, as the atmosphere stemmed more from Marr’s guitar and less from the album’s content. Really solid album. Once again, I hate that I like it.

So, The Queen Is Dead; long live The Queen.

Anonymous said…
Ok enough joking aside I realized what has bothered me about this whole thing. It is not so much that you are examining the Smiths but that you are spending so much time exploring them and criting them when your rich talents can be used to look at something fresh and new as you normally do. If you are going to explore old albums that you have just missed I would rather have seen you just explore something more along your normal palette to see your view on something that has just snuck by you and is really a hidden gem compared to....The Smiths.
5/21/2007 3:13 PM