To Whom It May Interest #8:
Struggling to Understand The Smiths – Part 4: “Strangeways, Here We Come” 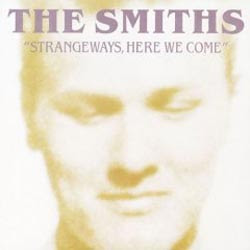 Tap, tap, tapping away at the keys, I’m only thinking of the word “transition.” Bands do it all the time: “transitioning” that is. A band will change their sound, incorporate classical instruments, work with Timbaland or Bono, fuel their bloodstreams with chemicals and “transition” from sober to wasted for the sake of art. Other bands, well…”transition” means “call it quits,” allowing each respective member to “transition” somewhere else in some other way.

But, before the “transition” occurs, there’s always that one final album to consider: the “Swan Song.” ”Strangeways, Here We Come” is not only The Smiths’ last chapter, but also the mark of a band that was trying to go somewhere else musically. Morrissey was still prosaically bummed out, as he should’ve been, (every band needs a distinguishing characteristic, especially when they want to try something else), but the rest of the band feels like they were trying to change what they were. It’s like they were shooting to become less of an 80s alternative, and more of an 80s rock band. When you hear a track like “I Started Something I Couldn’t Finish,” a song prominently rocking its high-end brass and plastic drum pad, you do consider the possibility.

“A Rush And A Push And The Land Is Ours” is a song I’ve probably listened to twenty times. As an opener it’s great, announcing an evolved sound that incorporates some harpsichord keyboards and xylophone, but assuring you, you diehard-SMITHS-head you, that Morrissey is sticking to his guns. Then “I Started Something I Couldn’t Finish” follows sounding more INXS than Smiths, prompting visions of Morrissey and Marr, clad in heavily-buckled leather jackets with checkered straps wrapped around the shoulders, doing George Michael two-steps in frosted jeans and Keds.

But, they weren’t going to completely abandon the characteristics with which they were so well known. “Death Of A Disco Dancer” definitely earns points in the fey category, but the bassline is tight and I really like the erratic guitar picking that Marr employs. The riff he ultimately throws in is really nice on the ears. “Girlfriend In A Coma” offers up the familiar juxtaposition of upbeat rhythms built around not-so-upbeat context and “Stop Me If You Think You’ve Heard This One Before” could’ve been a B-side from The Queen Is Dead. “Last Night I Dreamt That Somebody Loved Me” opens very theatrically with a piano solo and the noise of townspeople distanced in the background, then breaks into orchestrated strings, bringing back the movie element that was fairly prominent in Meat Is Murder.

So, The Smiths didn’t necessarily vacate what they’d established as “them” in terms of sound, but even within the songs mentioned above, you can hear how they were experimenting with time signatures and production.

“Unhappy Birthday” sort of makes me wish Morrissey would just get angry like the rest of us. I’d like to hear him unleash a barrage of “fuck”s and “shit”s and hear him describe in full detail what it was like to break the wrists of his enemy. Sometimes it’s okay to be legitimately pissed off and willing to beat the shit out of something or someone. I highly doubt the object of Morrissey’s lesser opinions cared that he was wished an “unhappy birthday.” Or, maybe an “unhappy birthday” is all it takes.

“Paint A Vulgar Picture” does just that in terms of record label greed. I can only imagine that record companies probably had a lot to do with why The Smiths “transitioned” in the first place, so this song is significant to the mix.

Nothing bitter being said here at all.

“Death At One’s Elbow” brings the tempo back with some fast rockabilly before the album closes with “I Won’t Share You,” a folk track bearing the Smiths brand. These last two tracks seem to fly by.

The eternal “what if” for any music fan always involves the dead musician or the broken up band. And the question always revolves around what they could’ve done if they’d stayed alive/together. It would’ve been interesting to hear how The Smiths might’ve followed ”Strangeways”. On the other hand, their next record could’ve sucked and THEN they could’ve broken up, bumming out lots of already-depressed fans and ruining their string of otherwise successful releases. It’s a dangerous “what if.”

In the case of The Smiths, the business side of music and their prolific output definitely took its toll, causing them to “transition” in more ways than one. After a couple weeks of listening to little else though, their short but significant contribution to indie and pop music is undeniable so…any fan should find enough consolation with that. I do.

P.S. — Special thanks to Chris L. for the countless discussions and the generous donation of the albums reviewed herein for this series. And thanks to everyone for reading it.
the smiths to whom it may interest

Anonymous said…
Ahh, the crusty exterior has been breached. The mighty Smiths have found the missing scale on your armored underbelly. Now we must only let time take its toll as the poison nectar takes hold and you become a true convert. All kidding aside -- you have done a fantastic job on these write-ups. I know it was hard for you, but you approached the undertaking with as much open-mindedness as you could muster. And that is commendable.
5/30/2007 10:01 AM

Sean Caldwell said…
Thanks, Chris. I'm glad you enjoyed the reviews and thanks again for the albums and the insight. A couple years ago I definitely would've covered my ears yelling "LA LA LA LA LA" to anything The Smiths threw together, so I'm glad that I took the plunge so to speak.

At some point, I'd like to pick up the singles discs and their debut. But, I'm going to take it easy on The Smiths for a bit. Two weeks straight on heavy rotation with no breaks? I have to get back to the new stuff.