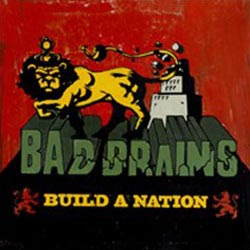 It’s 25 years since the release of the Bad Brains’ ROIR debut, and there still hasn’t been a hardcore/punk band that’s surpassed their might. I know I just pissed off a bunch of people with that statement, but I truly don’t give a shit. A million Warped Tours don’t amount to ANYTHING next to these guys, no matter what Alternative Press would have you believe. Every riff those bands milk for all they’re worth? They didn’t write ‘em. They weren’t blessed them during mind-altering run-ins with Krylon. They got those riffs from the Bad Brains, who have seemingly resigned themselves to be one of the most underrated bands of all time, and have basically watched all the credit due them roll right past and get slapped onto lesser punk rawk acts like they were Simple Plan stickers.

Aside from being able to play harder and faster than your crappy band, the Bad Brains have always stood out as a preaching machine. Being Rastafarians, many of their songs have been odes to Jah and, consequently, many of their albums have been peppered with reggae. Also, they’re probably the coolest “positive” band you’ve ever heard, always rocking that “PMA” (Positive Mental Attitude) and trying to infect audiences with a decent amount of spirituality and a feeling of togetherness. Build A Nation, their first album in 12 years, has no lack of that.

The Beastie Boys’ Adam “MCA” Yauch, a wagging-tongued Bad Brains fanatic, assumed roll of producer for Build A Nation, which is more or less a return to the ROIR sound of yore, but with more reggae. 1995’s God Of Love, though not terrible, didn’t really deliver on their energy and slacked badly on the rock end. That being the case, Build A Nation was a surprising listen as it really doesn’t differ too much from their debut, though HR seems to have run out of things to sing about.

If any religious service began with something like “Give Thanks And Praises,” I’d make sure I was the first one in the pew every Sunday morning. Take a note Kirk Cameron: You want people to convert? Start playing shit like this and God will look cool. At least, he’ll look cooler than He does now with people like you leading His cause.

“Jah People Make the World Go Round” thunders in, Darryl Jenifer’s perfectly muddled and raw bass line making a huge impact on the track. The short and sweet “Pure Love,” belongs to Dr. Know as he expertly solos through the song’s opening and then throws down the heavy chops. “Let There Be Angels (Just Like You)” and “Universal Peace” are probably the best tracks on the album, providing a midway block of hardcore perfection.

“Send You No Flowers,” a track that was present on the Black Dots LP, the first ACTUAL recording sessions for the Bad Brains in 1979 (released on Caroline Records in 1996 if you’re interested, it’s awesome), is reconceived for Build A Nation, sounding NOTHING like the original. Being a track that was never officially released, I guess HR and Co. felt like digging it out of obscurity, but changing it completely. Or, they just liked the title and decided to pin it onto another song. Either way, it’s a good track.

As far as the reggae is concerned, it’s competent and enjoyable. Does it represent the full range and ability of the Bad Brains? Sort of, but not completely. The thing to love about the Bad Brains is the energy with which they hit you upside the head and their amazing frontman. HR has one of the best voices to ever grace any microphone. Coupled with his loud and raw backdrop, HR creates a sound unmistakable and distinguished enough that it properly separates the fakes from the real deal. Fronting reggae, he sounds like any Rasta vocalist and his charismatic presence doesn’t really get through. “Natty Dreadlocks ‘pon the Mountain Top” is one of the better reggae tracks. Comparatively, “Jah Love,” sounds too machined. This sort of leads me to the album’s big detractor.

Aside from HR being a little too in love with echo effects and repeating his lines a bit too much, Yauch’s treatment of the material is rather sanitary. In fact, it’s too fucking sanitary. Jenifer’s bass line is the only aspect of this album that still carries the grit in which the ROIR sessions so gloriously put on display. Earl Hudson’s drum sound is too pristine and Dr. Know’s guitar is almost hidden behind the bass. The playing, for the most part, is on point. But, without the grime, it feels incomplete. It’s amazing that lo-tech production got more out of this band than a big money studio.

But, Build A Nation is a welcome return to form from a band that, thankfully, refuses to quit. They may never be what they were 25 years ago, but they can still play harder and faster than your crappy band.