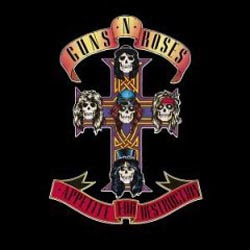 The cover story of the latest Rolling Stone was staring at me on my way out of the apartment a couple days ago, haphazardly stacked among mailers for missing children and strewn coupon rags:

I was on my way to braving the morning commute, and wound up thinking about the fact that Guns n’ Roses really did put out Appetite for Destruction twenty years ago. Wow. Twenty years. I turned 11 that year all the while agreeing wholeheartedly that the riffs on “Welcome to the Jungle” and “Paradise City” were fucking badass.

That was a pinnacle album. At the time, it was all about huge hair, neon lipstick and metal cheese. The external was the focus as bands partied hard and used their groupies to sell the image. It’s a lot like what’s happening now with rap music as its message has more or less been eviscerated by its masturbatory boasting of material wealth and “ho’s.” The music took a backseat and the crowd was okay with that, so long as there was something glamorous to look at and a superficial hook to sing along with. 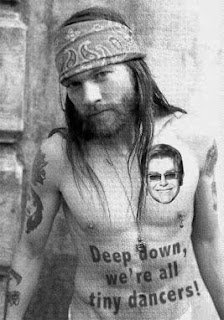 Appetite made a bold statement that romanticized the ugly and made it all about the music once again. Raw and unapologetic, Gn’R somehow managed to capitalize on its anti-glamour and started a rift wherein glam metal was thankfully losing steam and the hair was starting to flatten. For me, it was their only good album. It all went downhill once Axl went Elton.


Since Appetite’s reign, there’ve been many breakthrough albums. Twenty years worth of blown minds, revived rebellion, vulgarity, drugged-out delusion, recycled sounds, samples, guitars, drums, turntables…it’s all found its way into your minds and into the minds of your impressionable children, ready to inspire or ruin. I had to wonder, though: Twenty years later, have we had an album like Appetite since? Has there been an album since that’s managed to cross into otherworldly territory and reminded the public how guitars are REALLY supposed to be played?

Unknown said…
Has there been an album since that’s managed to cross into otherworldly territory and reminded the public how guitars are REALLY supposed to be played?

this is not supposed to be an asshat, knee-jerk response, but I'm afraid it will come off as one. It also makes me feel my age.

I've listened to a lot of rock records lately (I don't have a choice, seeing as I "just" discovered classic rock at 20), and you're absolutely right: numerous nameless 4-person and 3-person bands of guitar, bass, and drums can put out albums, all with fundamentally the same core ideas, but some just work better than others.

Anonymous said…
Might seem a little cliche but if I were to think of anything I would have to say Nevermind. This took us away from ballad rock (that even GnR fell victim to) and finally once and for all killed hair metal and focused the limelight on the music. Might not be a technical masterpiece but was indeed that earth shaking where the fuck was this shit hiding moment rock was looking for.
8/10/2007 4:21 PM

I haven't checked this out yet. I must confess that my exposure to Latin-based music hasn't been very expansive. My wife's a big fan of The Gypsy Kings and one of my favorite guitar records is Friday Night in San Francisco by Al DiMeola, John McLaughlin, and Paco DeLucia. If you haven't heard THAT one, you should check it out. I think you'll really dig it.

Would you consider Rodrigo Y Gabriela something as culturally shifting as Appetite, though? Do you think it has the potential to change the course of popular music?

Nevermind probably would've been my first response, but that was more or less the boom that shook things up. I'm thinking of Appetite as more of a match that unsuspectingly lit the fuse. It's possible that we won't recognize which album will duplicate the Appetite effect until years from now, but it's interesting to reflect on the last couple years and wonder if there's a change a' comin'. I really hope there is and that it's a change for the better.