The Album In My Hand Is My Reward 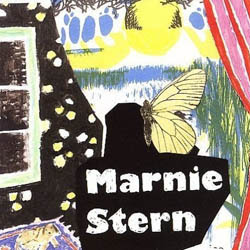 Upon first listen, and it’s been literal months of listening, Marnie Stern’s In Advance of the Broken Arm isn’t the easiest thing to absorb. Ponder the idea for a moment that someone like Stern remembers every record she’s ever heard and wanted very badly to mash them all together like a protein shake of her greatest hits, figuring that that would make for a unique experience. Guitar-wise, she’s anywhere between Eddie Van Halen and D. Boon. Vocally, a cheerleader tapped her vein while reading Plath, maybe gleaned a couple inflections from The Fall’s Mark E. Smith and fell in love with studio filters. Rhythmically? Too structured for Free Jazz; too chaotic for Prog. In Advance of the Broken Arm is, in a word, “unfocused.” It’s also one of the most original albums you’ll ever hear.

I’ve been dreading this review specifically because it’s been a trial coming up with words to put to this album. As best as I can put it, In Advance of the Broken Arm is in advance of the broken ear drum, the broken thumbs, the broken wrists, the broken strings and the broken concepts of independent music, for the sake of the advance in appreciating what Stern’s trying to do. Hella drummer, Zach Hill, acts with Stern as co-arranger for the album and together they come up with senseless acts of aural violence, an abruptly off-beat mix of hefty, fucked-up, billowing fields of anti-structure. And, as Stern sings “Every Single Line Means Something,” we can gather that she knows what she’s doing. Stern HAS to know what she’s doing: She’s creating her own destroyed brand of sonic notage and expecting us to understand.

Beginning with the thrown-together percussive havoc of “Vibrational Match,” Stern presents herself the cute intellectually charged poet. Her vocal style alone makes one wonder if she spent a lot of her life not being taken seriously, driving her into the bottomless mental depths from which she pulled this music. ”Keep on, keep at it, keep on, keep at it…” as she says in follow-up “Grapefruit,” personal motivation to keep up with the music game or just a pep talk to keep the album running.

“Every Single Line Means Something” is probably the least randomly conceived song presented herein, and even that can’t stick to a definitive backbeat. Still, Stern does succeed at conveying a high level of emotion. Couple that with the album’s compelling chaos, it becomes personal.

Stern treats “Put All Your Eggs In One Basket And Then Watch The Basket!!!” like a dissonant jump-rope song, exuding a degree of childlike joy. “Logical Volume” follows like a non-stop air raid siren and mutates into a randomly Scotch taped onslaught of ideas. A Primus inspired bass loop sets off the caffeine crash of “This American Life,” which begs “Mythology come take me away.” “The Weight of a Rock” is straight-up trance, Zach Hill rocking some amazing energy amidst Stern’s off-tune riffs.

“Plato’s Fucked Up Cave,” my personal high point, is as broken as it sounds. Coming off drained and hopeless, Stern monotonously states ”I am blind, but I can dream/I can I can…” over a drunkenly out of sync but emotionally desperate bassline and guitar strum. At points, the music realizes the possibility of escape by speeding up, but then falls back into its rut once faced with the futility of its efforts.

In the album’s closer, “Patterns of a Diamond Ceiling,” Marnie Stern states the following:

What she says has to be true. In Advance of the Broken Arm stands to gain admirers, but its only return will be that she created it. Evading mass-market appeal, evading any conventional understanding of what this is, Marnie Stern is definitely NOT looking for a pot of gold. But, she has come up with something different and honest. In Advance of the Broken Arm is a very loud reminder that constraints can be broken and that emotion can override structure. Being aware of how long ago this album released, I can only hope that someone reads this and gives the album a shot. It may take a couple listens to get it, but you’ll understand eventually.