- November 25, 2007
Since somehow making an impression with PC Magazine, I’ve been receiving a lot of emails. Musicians want to promote their music; promotional types want to advertise their music-related ventures…etc. It’s all very interesting, informative and overwhelming at once, mostly because I’m still not completely used to the idea that people read what I write and that I might wave a certain amount of influence. I’m too modest to believe that I do, but I figure I can at least spread the “word” for some of those that have found their way to my inbox.

I was given the heads-up about a month ago that a company called Hobnox put together an interactive documentary covering Jimi Hendrix’s historical appearance at the Monterey Pop Festival. It’s available online through the company’s Mi145 channel (Music Intelligence) and is narrated by Henry Rollins. I’ve been checking it out and it’s a fantastic piece of work, thoroughly researched and worth your time. I mean, it’s Hendrix, it’s Monterey, it’s live…can you really go wrong? 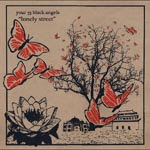 A fellow named Bryan wrote me this extremely flattering letter and then gave me some info on an indie band that he’s really into called, Your 33 Black Angels. David Fricke at Rolling Stone magazine recently gave them a fairly positive write-up, promoting their self-released album, Lonely Street. I gave them a listen and I think they have potential in the Pitchfork circuit, if those guys haven’t discovered this band yet. To me, they sound like a somewhat unpolished take on Dinosaur, Jr.. If J. Mascis hadn’t brought Dino back into the spotlight, I might’ve said that Your 33 Black Angels was essentially collecting the pipe and running with it. My take on their tunes notwithstanding, I’m always willing to credit a self-financed band that manages to get the attention of eminent figures at premiere rock rags. Lots ‘o luck.

Sincerely,
Letters From A Tapehead
henry rollins to whom it may interest