“…In the pale moon light/In the silver rain…” 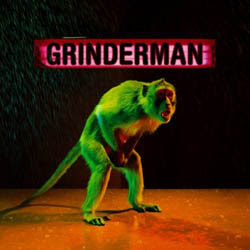 Hearing “No Pussy Blues,” the self-explanatory single from Grinderman’s self-titled ode to testosterone-soaked disillusionment, it’s more than evident that Nick Cave doesn’t buy into James Brown’s assessment of which gender owns the world. Though not always with words, there is a degree of disillusionment that seems to carry through Grinderman, a personality that develops into a humanized characterization. He spills his guts while beating the bongos like he’s sitting amongst ZZ Top and The Nuge in a males-only drum circle and relates with raw prose: a hardened, bored desperado in a modern day nightmare wherein he’s sadly realized that he’s broken his back for the sake of his biological drive and has pathetically failed. 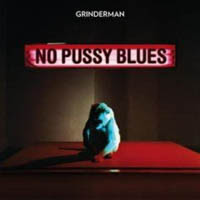 Grinderman, a product of Cave and fellow Bad Seeds, Warren Ellis, Martyn Casey and Jim Sclavunos, is stream of thought rock at its most determined and simultaneously frustrated. It seems to start off angry, turn sad, turn cynical and then ultimately turns resolute. Nick Cave will recite beatnik style over sometimes simple and uninterrupted streams of fuzztone noise and bongos. With opening track, “Get It On,” and the aforementioned “No Pussy Blues,” Grinderman adds arsenic to the coffeehouse dynamic, not only with their abrasive instrumentation but also with their commanding presence.

The spoken word gives way to actual singing though by the third track and somber turns prevalent. “Electric Alice,” wildly powered by a flurry of organ noise and distortion is the album’s most entrancing track, permeating with psychedelic sadness. And then “Grinderman,” Cave’s lonely introduction to his character, doesn’t really go into details. It relies on its tone to tell the story with a couple phrases:

Other songs like “(I Don’t Need You To) Set Me Free” or “Go Tell The Women” point toward this need to either improve or find something new, as if the drum-circle has led to some self-awareness and a desire to fix everything. “Honey Bee (Let’s Fly To Mars)” and the rather passionate “Man In The Moon” only add to the heap of issues.

Closing with the violin driven “When My Loves Come Down” and guitar rocker “Love Bomb,” Grinderman is almost like a male-oriented Lifetime movie, a somewhat self-absorbed treatise on the death of the male archetype amidst an overabundance of dismay and lack of direction.

Anonymous said…
Was "Electric Alice" inspired by David Lynch/Angelo Badalamenti? Either way, I agree with your interpretation of the album as being overly masculine. I listened to "No Pussy Blues" and felt like I was sitting next to a drunk twenty-something screaming in my ear, and then listening to "Electric Alice" I felt like I was seeing the same guy later completely hammered and crying about something he could never have. It's some pretty powerful stuff and artistically I think it's top notch. Thanks for the heads-up on the album.
11/02/2007 10:54 AM

Unknown said…
I pulled this from the library a few weeks ago - I'm a mild Nick Cave fan (thanks entirely to "red right hand" and "stagger lee"), and was interested in how he'd sound under a different moniker.

I was more than pleasantly surprised to be so blatantly reminded of Nick's punk background, which is still so very intact.

Yeah, "Electric Alice," does sort of radiate with that errie, velvety sort of sonic dissonance that Lynch employs in his flicks. It's my favorite track on the album.

Just a sidenote: If you're interested in Badalamenti, you should check out Bohren Und Der Club Der Gore. They're a German jazz act and they're really into that enveloping darkness vibe. Chilling stuff, but beautiful.

Glad you enjoyed the review.

I'll admit, I'm not very schooled in Nick Cave. I've heard enough of The Bad Seeds and The Birthday Party to know what's up, but I've only ever admired both acts from afar. After hearing this, I'd like to start becoming better acquainted with Cave.

Thanks for reading and thanks very much for the comments.