“Party people in the house, get ready for this:” Alt Dance Revolution 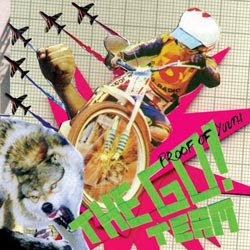 I guess that being fun can carry you a decent clip. When first listening to Proof Of Youth, second helping from UK sextet The Go! Team, I thought its groove heavy dance jams were interestingly crafted, molding an array of guitar sounds that owe a lot to Fugazi and kicking old school breakbeats like they never went out of style. Go! Team founder, Ian Parton, has vision and he’s definitely into keeping the vibe uplifting if not drenched in rave-like urgency and ecstasy-tinged sweat. Not to say it’s the typical byproduct of glowsticks and laced pacifiers, but Proof Of Youth could easily fit into such a mold. That being the case, do we appreciate that Parton has a different take on party music or that it’s just party music?

It could be argued that hip-hop’s roots emerge from similar territory, being the music that got the room bumping and the crowd jumping. But, once philosophy was brought into the picture, hip-hop became a voice for an undervalued and mostly silent demographic. Dance music, at least as I’m typing this, has always been dance music. Its job has been basically to keep the bar crowded, keep the floor moving and get the patrons laid after hours. No one gives a fuck what it has to say and maybe Parton’s trying to change that by breaking through with his variation. But, if that’s the case, why would you hire The Spice Girls to deliver the message?

As I said earlier, the altrock/dance/hip-hop hybrid Parton and Co. has brought to life is a charged and excitable mix of energy and innovation. I love the almost scratchy horn section sampled at the beginning of “Doing It Right,” the meaty bass-line and machinegun guitar fire in “Titanic Vandalism.” “Universal Speech” has an awesome groove nicely accentuated by glockenspiel keys. And Chuck D makes an appearance for “Flashlight Fight,” which earns Proof Of Youth cool points with me on a personal level.

Where I get confused, and I really feel that this works to detract everything else going on, is with the vocals. Vocally The Go! Team relies too heavily on cheerleader reiterations of hooks and some very elementary MC’ing. As much as I’m all about the old school, there are some things that I’m glad hip-hop has grown out of and that’s the basic “reading is fundamental” lyricism that used to dominate the genre’s earliest offerings. A “cheese” factor is bolstered consequently and the music suffers for it.

Though Proof Of Youth is mostly devoted to its brand of dance music, The Go! Team also experiment with folk instrumentals (“My World”) and sometimes there’s singing involved (“Fake ID,” “I Never Needed It So Much Now” – featuring Solex singer, Elisabeth Esselink). Closing instrumental, “Patricia’s Moving Picture,” is the album’s best track, confidently throwing down its groove with harmonic strings and big band horn accentuating it. It’s bold but pleasant.

On a somewhat separate note, I’d like to mention Cibo Matto as they were also an act that had a hand in alternatively influenced dance music. They rapped over tracks, also with a somewhat elementary tack for rhyming (though it may have helped that English was their second language) and they experimented with sampled beats, rock and pop music. Not to say that Parton lifted his inspiration straight from them, but because Cibo Matto were doing something similar ten years ago, it’s possible that Parton’s sound is a little late in the making. Keeping this in mind, it could very well have influenced my take on Proof Of Youth.

But hey, at least it ain’t disco.

Anonymous said…
Excellent review - but I have to respectfully say you overwrote it.

It should have been:

The rating 1-10 - with the sentence," The vocals on this album make me want to puncture my eardrums with a spork."

At least in my world, that would have been a perfect review.

Yeah, I wasn't too big a fan of the record. I didn't hate it as much as you though. A spork? That's just hatred.

Glad you dug the Sonic Youth/Thurston Moore. If you felt old reading it, you have some idea of how I felt while writing it.