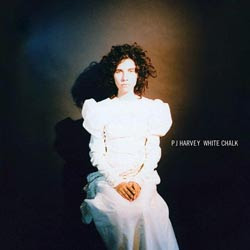 I hate to say that it summarizes the album, but it is very telling that White Chalk, latest offering from Mizz Polly Jean Harvey, has a song in it called “The Piano.”

Shaping the overall tone and especially the mood, the piano is indeed the vehicle by which Harvey expresses herself and reveals…well, it’s almost like she’s never sung before now. That’s not to say that Harvey’s past work doesn’t compare, or that she’s never sung a powerful note: none of that would be true. But, with White Chalk, you realize what KIND of singing she’s capable of as she exudes this childlike voice that’s worn life’s tragedies and reflected on its own perhaps uncertain existence. Emanating from that characteristically self-assured, charismatic rocker throat, I had to check a couple times to whom I was listening, because it doesn’t sound like Polly Jean.

Critics have applied the word “departure” to White Chalk like a cheap suit, and sure it is. “Quiet” would be another word, “haunting” yet another. The route that PJ took making this record has left it exposed to the most basic scrutiny. It’s probable that such a quick detour from her otherwise rock-riffed and snarled-lipped output would leave some scratching their heads, some bored but others in love with what she’s done, able to appreciate the artist for following her instincts.

I was uncertain about the record at first, because White Chalk is definitely not something that’s going to be appreciated ALL the time. With the inclusion of the 60s pop-infused “The Devil,” the extent to which Harvey has traveled isn’t quite apparent. Yeah, it’s got piano and it’s definitely more mellow than usual, but “The Devil” does maintain certain energy, hammering percussion that, even with Harvey’s “little girl” inflections, animates the opener and draws you in. From there, follow-up, “Dear Darkness,” drops the energy all together and replaces it with despairing and subtle beauty. Not that it’s a bad trade, but it can kill the mood if you don’t know what to expect, especially since “Dear Darkness” sort of sets a precedent for the rest of the album: despairing and subtle beauty, most of it without percussion or variation on mood. So mostly unified is White Chalk that when it even sort of changes its pace you have your standout tracks.

“Grow Grow Grow” sounds like it dances at points, piano keys swirling into loops as Harvey sings its hook. “White Chalk” adds some country flavor to the mix, throwing in acoustic guitar and banjo with Harvey sounding vocally distant. And “The Piano” does heighten the album’s tempo a bit with syncopated drum rolls and rapid hi-hat play. Otherwise, the piano balladry that Harvey explores, though beautiful as it is, comes dangerously close to flattening the album. And when she ventures into clichéd bouts of the epically sung outro, a sin she commits with “Silence” and final track, “The Mountain,” Harvey inadvertently ranks herself among the multitudes of sound-a-like sing/song female piano players. She’s better than that, and in those instances, she doesn’t sound it.

Overall, as somber as Harvey sits on the cover, that’s about as honest a conveyance as you can get for this record. It is morose, but it’s also gorgeously played and wonderfully sung. And, it’s definitely a “departure” that’s “quiet” and “haunting.” It’s such a “departure,” I have to wonder what her next “departure” will sound like. Hopefully not “quiet” or “haunting.”