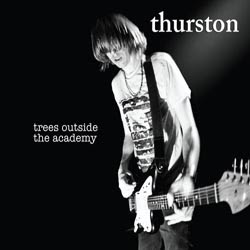 ”What you have heard, is me wasting time, again asking myself deep inside, ‘Why the fuck am I doing this?’”
— “Thurston @ 13” 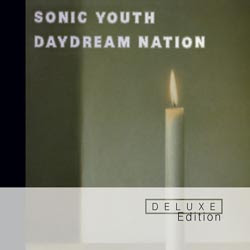 Though more than a few hands were responsible for the altrock boom in the early 90s, you can send most of your “thank you” letters to Sonic Youth’s Daydream Nation. Architecturally speaking, a blueprint so off-key and aberrantly structured manifested itself with high-frequency and urgent guitar arrangements, long outros and a much-needed “Teen Age Riot.” It was exactly the spirit Kurt Cobain caught a whiff of before he accidentally knocked the jiffy-popped 80s off its neon horse and offered artful cynicism and disenchantment to the media-dubbed GEN X’ers as a means of expression. 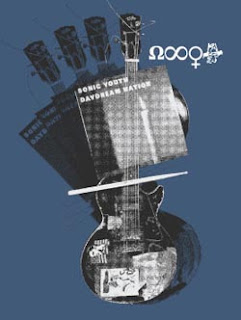 Sounding as inventive as it did almost twenty years ago, Daydream Nation, receiving the same respectful and necessary remastering treatments that graced Dirty (2003) and Goo (2005), brought the mostly-thriving music underground to the forefront, grooming its emergence into the public eye at the expense of Warrant and MC Hammer. Granted it also ushered in a gang of hacks, but for a little while, music felt legitimate in the mainstream. There was an uncompromising mystique that instilled its mostly unique posturing into its listeners while it simultaneously mortified baby-boomer parents everywhere. I remember it well: All was right with the world for that spec of utopian time.

Then Cobain died, unintentionally bestowing upon himself a morbid sainthood while the music-buying public turned complacent. A new era of Poison-bred hacks came into being albeit dressed like a gang of Pearl Jam cover bands while the punk renaissance took hold without the grit, grime or passion of the past. Punk reunions hit an all time high. Even The Sex Pistols jumped on that bandwagon. Was there any integrity left?

But, I digress. Point is: Daydream Nation brought a lot of scrutiny to the mainstream with its poise, its drama and its vision. We owe Sonic Youth and this record a lot.

Trees Outside The Academy, Moore’s second solo record, (his first, 1995’s Psychic Hearts, was reissued last year by Geffen Records), is a folk-based take on the style he’s managed to make work for him since Sonic Youth’s inception back in 1981. Replete with classical strings and musical assistance from Sonic Youth drummer Steve Shelley and Dinosaur Jr. ’s J. Mascis, it’s a rather fascinating listen after you consider the boom-snap-crackle of something as momentous as Daydream Nation. Moore doesn’t come off like he has to change the tides or rock the boat, but he is personally engaging and well-aware of how to age gracefully after spending the last 26 years alienating and winning fans album-after-album. Now, he just hopes you listen. 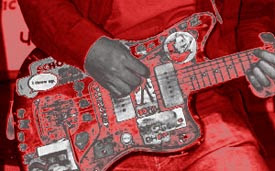 Mostly shying away from the static-heavy noise rock that’s molded his reputation, Moore still brandishes his distinct guitar style though now it’s an acoustic variation. He still carries songs with mesmerizing midway guitar passages (“Silver>Blue”) and displays momentary fascinations with feedback and dissonance (instrumentals, “American Coffin” and “Trees Outside The Academy”). But the remarkably mature aspects of his arrangements are the album’s focal point. Once the album opens with the somewhat somber “Frozen GTR,” Moore’s familiar Lou Reed vocal graces light guitar static, acoustic guitar and lovely violin play. This interaction is carried out through following tracks “The Shape Is In A Trance,” “Fri/End,” and “Never Day.”

I don’t want to say that Trees Outside The Academy stands as some sort of middle-aged testimony from a man that seems sometimes overlooked in terms of his involvement in the evolution of modern music, but it definitely makes his presence and the presence of our altrock forefathers known. Even though Daydream Nation stands as a tsunami-tide watermark in terms of artistic achievements, Trees Outside The Academy is almost more engaging as Daydream’s subtle postscript, proving that there are still places to go even after you get it perfect.