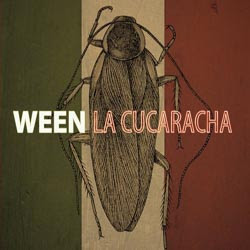 Philistines, it’s as if I’m one of you.

It pains me to scribe words of discontent regarding a band that has been cited more than once as “genius,” especially since I finally get it. I’ll admit it: Ween’s bus was one that I avoided many, many times. And why? “Push The Little Daisies” put me off my food. I was probably fifteen or sixteen when that rather unpleasant little ditty broke through into then alterna-heavy MTV and it wasn’t something I wanted any part of. Consequently, I missed out on Chocolate And Cheese, The Mollusk, White Pepper…eee tee see. And now after taking a month or so to absorb the back catalog, I see the error of my ways and admit that I should’ve been a little more open to what they were doing. However, it’s too bad that La Cucaracha, Ween’s latest foray into cross-genre copycatting, is almost making me revert to past opinions. This time of course, I’m better informed.

It’s not that the album itself is bad. It just feels remarkably uneven and not as inspired as past efforts. The craftsmanship with which Ween have built their overwhelmingly creative catalog makes some very bold attempts at rising to the surface within the grooves of La Cucaracha, but its inconsistency makes the record feel like it just is…and that that’s all there is to it.

With opening instrumental, “Fiesta,” one gains a sense of relief that goofball antics will be abound and driven by the craziest of the crazy and the weirdest of the weird in terms of music-scaped varieties of shapes, colors and sizes. Saxophonist David Sanborn, best known for his association within the smooth jazz circles of headphone atrocity, sounds like he’s having a blast here and he probably is. When the smooth guitar picking and abrupt synth effects of “Blue Balloon” kick in, the album feels like it’ll hit past creative heights or even surpass them. And then the Cher-iffic “Friends” enters the line-up and it’s hit or miss from that point on.

I get irony and I figure “Friends” is present only as a techno-hyuk hyuk, but it feels like a lazy joke. This isn’t the first time the brothers Ween have voyaged into dance/techno/industrial hodge-podges, (The Mollusk’s “Jonny On The Spot” comes to mind), but they’ve done so with a seeming awareness of how far they could go with being goofy as fuck. Lyrically, it’s just too humorless to fully carry out its likely intention of garnering a few chuckles.

One of the more stand-out, and disturbing, tracks on La Cucaracha is “Object,” which is sort of a Canned Heat meets James Taylor testimony from what might be either a serial killer or a sicko with a homicidally-charged penchant for displaying his affections. Mood-wise it’s topnotch and spectacularly cold. It’s definitely the album’s masterpiece and the yardstick by which all other songs wind up based, which is also where the album falls short.

From here we have the catchy and well-meaning “Learnin’ To Love” and “My Own Bare Hands” which only exists to score the record a Parental Advisory. I did enjoy the line about ”She’s gonna be my cock professah/studyin’ my dick!/she’s gonna get a master’s degree in fuckin’ me!” That made me laugh like the juvenile I am, or pretend to be.

Reggae track, “The Fruit Man,” fails to inspire, as does “Spirit Walker” which also ventures into Cher territory with the wiggling robot effect applied to the vocal. The midway duck chants don’t do much to improve it.

“Shamemaker” breaks up the monotony of the previous tracks with its purposeful silliness and ample snot while “Sweetheart In The Summer” adds a check mark in the plus column. Philly cellist, Larry Gold, provides some beautifully arranged strings over this well-executed soft rocker that showcases some nice guitar work and a genuine vocal a la Dean Ween. Even overly sentimental “Lullaby” works well to convey the talents of the band, though the track itself is sort of a throwaway.

As I said before, the album itself isn’t bad, but it seems beneath Ween. With the addition of some unnecessary tracks, Gene, Dean and producer, Rollins Band alumni and Ween compatriot, Andrew Weiss, miss the mark. The things they do well, they do REALLY well, but that only attracts more attention to their missteps. It seems that when anyone else does something decent, it’s okay. But, decency didn’t get Ween anywhere and La Cucaracha proves it.