- January 17, 2008
Post-holiday fanboy purchases. Don’t you love it when you can buy shit for yourself again?

After realizing that I’d thought of very little else other than The Complete On The Corner Sessions box set once it’d been made known to me that it existed, I had to figure out a way to get one. With Christmas having passed and the availability of “buy yourself something fun” money, I strolled into a local BORDERS during my lunch hour and strolled out with this metallically packaged beauty.

It is however just as daunting as I thought it would be to listen to. Six plus hours of Miles Davis jamming out, creating soundscapes the likes of which modern America still hasn’t quite been able to fathom. Even the package seems ahead of its time. Seriously there is some incredible music in this set to explore, but it is an acquired taste. Completely worth the money, though it is overpriced. 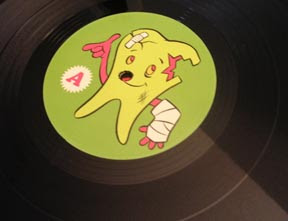 I also shelled out a couple bucks for the triple 10” box set of Era Vulgaris by Queens of the Stone Age. Sheer novelty value is probably my largest excuse, plus the set’s quickly squandered availability. I was sort of hoping that, since it’s a “box set,” it would’ve included some of the B-sides, like the album’s title track, which was absent from the actual release. I think though you have to go the import route for that unfortunately. Still…great album; interesting format.

Edit: The box set features the B-side "Running Joke." Something I overlooked.

And novelty was definitely the reason I bought Sleep’s Holy Mountain on vinyl, novelty taking the form of hippie-inspired green/purple tie-dyed vinyl and a 12” version of that magnificent cover. C’mon…that’ll look awesome on ANY wall. Having been unable to lawfully extract this from the merch table at the Om show, I had my heart set on owning this on vinyl. The option of green/purple vinyl was appealing: I just don’t have enough colored vinyl.

Sincerely,
Letters From A Tapehead
fusion jazz miles davis queens of the stone age shopping for records stoner to whom it may interest

Unknown said…
Saw the Era Vulgaris 3x10" at a local rekkid store, was interested until i saw the $30 price tag... $20 would have sent me over the edge.

And as for StonerRock.com, been thinking of ordering through them.. what's your experience been like, for turnaround and quality and all that?
1/18/2008 10:53 AM

Yeah, I think I wound up spending about $30. It was a little pricey but I'm enjoying it. The amount of money I'll spend on ANY album is usually connected to how I feel about the band. Being a huge QOTSA fan, I really didn't have a problem dropping the money. Not necessarily the most economically viable criteria, but...

As far as Stonerrock.com, I would say that it was a pleasant experience. I like their inventory and, as far as turnaround and quality, I really can't complain. Everything arrived in great shape and all within a week. I'd recommend.