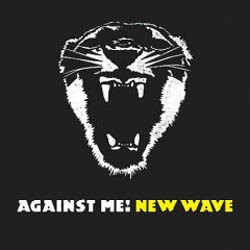 I guess I got a little too passionate.

Around Christmas, it came to light that Spin magazine, certainly the paramount authority on all things music (cough, cough), put Against Me!'s comedy record, New Wave, at the top of the list for the best of 2007. Deputy Editor, Steve Kandell, wrote a small blurb that more or less built up New Wave as "a beacon," and supplied them ample kudos for their "crowd-pleasing tendencies." While praising Against Me!'s willingness to be as radio-friendly as possible, Kandell also went so far as to sort of jab Nirvana, (Butch Vig produced New Wave), for trying to escape the more poppy aspects of Nevermind, as if trying to stay legitimate to your influences was a bad thing.

I know it's an opinion, in this case an opinion printed in an inconsequential pop music mag that probably made somebody some green. But I was so thoroughly offended by this record that I sort of let my fingers fly over the keyboard and came up with this angry piece of not-quite hate mail:

Call me shocked. It's understood that in this game where opinion is God, points, interjections and observations will whiz by our heads and shoot from our mouths with the rapidity of Tommy gun fire. Naturally what we have to say is only opinion, though we do try and hold these opinions in place with factoids and comparisons and then apply them to our music-based perspective. Fact: Your magazine voted Against Me!'s New Wave into the #1 spot for the year 2007. Opinion: You're wrong.

I'm well aware of how old the punk rock arguments become: "You're a sellout," "What are you doing on that label?," "You guys were cooler when you were playing basements and abandoned factories," etc. etc. Growing up in that atmosphere, I completely understand how nonsensical it becomes when a scene's ideals interfere with a band's evolution. It's a very closed-minded and tunneled way of looking at things, particularly when punk rock always shouted out, roared even, about striving to be an individual no matter what. So, yes, the hypocrisy radiates off these kids when they dismiss a band for the wrong reasons.

But, Mr. Kandell, what you fail to point out is the manipulative nature of New Wave. This album capitalizes on the punk pathology and unflinchingly applies it to a sound that has more or less defiled and defined modern day music, as sad and insipid as it is. Kids that don't know any better will wind up following this group of guys as they call themselves authentic amongst the facsimiles and it's going to be very easy for Against Me! to dismiss all the accurate criticism decrying New Wave's legitimacy as just a bunch of typical punk rock static about their move to a major label. It's deeper than their label. New Wave isn't a beacon as you put it. It's a rut. It's a clever way to make sure that music sounds like it's going somewhere while it continually hits a wall. And you seem to pat them on the back for it, or at least, while drawing gratuitous comparisons between Against Me! and Nirvana, (using Butch Vig as the commonality), you find it refreshing that a punk group would embrace being popped like a wad of Big League Chew.

You ask: "Where do you go when punk rock is the establishment?" Albums like New Wave helped punk rock's inevitable decline and assimilation into the establishment. There's nothing snarling or protest-worthy to piss off parents, blow minds or unleash ANYTHING significant on the world at large. It's the same shit. New Wave is pure testimony that a highly exaggerated and self-imposed sense of importance can determine a band's place in music despite its obvious and shameful existence as just another spoke in the pop wheel. It evidently had an affect on you and your publication and you for some reason show no hesitation in further ensuring that hacks like Against Me! can continue to decimate punk rock's importance and place in music.

In a perfect world, New Wave wouldn't have had a chance to shine in any spotlight. So, thank you for giving Against Me! the exposure they need to further corrupt and damage what once had a soul.

Mr. Kandell never did get back to me, but I don't really blame him. I'm sure he was less than thrilled to be greeted with my little protest upon returning to work after New Year's. If he read it, of course.

I guess New Wave qualifies, for me, as the most infuriating release of 2007. So, at least it deserves first place in ONE category.

Sincerely,
Letters From A Tapehead
punk to whom it may interest

Unknown said…
if you buy only one screaming-big-cat-covered album this year, make it ratatat's classics.