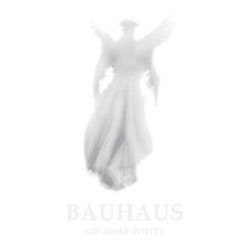 Let it be said that when reading something like “Their first record in 25 years,” I’m immediately skeptical. Why? A certain little band last year released one of these “reunion”-type albums much to my utter excitement and probable joy…y’know, till I listened to it. What band? The Stooges. It was the type of mismanaged clusterfuck that can only make one feel that reunions exist purely to decimate and tarnish what was once impenetrable and spotless. I know that bands are comprised of humans. I don’t need to know that they’re fallible and I don’t need reunions to prove it to me while they shamelessly, (smiles fully blazing and intact), embarrass themselves and sully their oftentimes legendary or at the very least respected pasts. It’s usually a cruel swipe at a music fan when he’s treated to a new album by a reunited band, especially when it’s a band as groundbreaking as The Stooges.

Needless to say, when dealing with something like Go Away White, latest and allegedly last album from goth rocker legends, Bauhaus, it’s been difficult to know what to write. It’s an enigma swaddled in an anomaly. It’s actually good.

Not necessarily on par with their past efforts, but a killer conclusion nonetheless, Go Away White is the newest old album I’ve heard in a while. I say that because it’s the type of thing that subtracts years off of you when you listen to it, reminding you of those carefree days standing on the precipice of your teenage years when you still had at least 4 or 5 epic and life-altering summers to look forward to. At least that’s the effect it has on me, especially when I listen to “Summer Of The Damned.”

It’s possible that all this reminiscence has to with the fact that Bauhaus is now a household name amongst the world’s elite. The people running the show these days? All the VPs and VIPs that were raised on Styrofoam Chicken McNuggets and Atari? Some went to Van Halen, others went to Joy Division. Some went to Bon Jovi, others went to Bauhaus. If the 80s had anything going for it under all the excess, Reaganism and neon, it’s that it had an underground. Meet one of its superstars.

Interestingly enough, being away from the scene for 25 years, at least in a group capacity, Peter Murphy and crew have somehow managed to look and feel current despite sticking mostly to their formula. It’s all sonic and dissonant guitar sounds, strong and snaky basslines and the Murphy croon that power this ten-song ticker, so they haven’t strayed or really changed anything about themselves. But, it would be difficult to find a song that so brilliantly sums up the past eight years as “Too Much 21st Century” does in the simplest of terms:

Evidently, even being superstars among the wannabe undead, they still live here.

“Endless Summer Of The Damned” is for me the grabber and I’m not even really sure why. When I first gave Go Away White its first spin, “Endless Summer Of The Damned” was ultimately the song that took my attention and garnered extra listens. It might just be the somewhat raw vitality inherent in the song’s minimalist structure, or the atmosphere it builds. Not sure, but it’s one of the coolest songs I’ve heard all year.

“Saved” and “The Dog’s A Vapour” are the album’s “creep” factor, starring Murphy in extra-grotesque croon mode over whines and waling six-string melancholy. “Mirror Remains,” which seems to take a midway time-out from being an actual song, (”Solo…(Solo begins)…Alright that’s a solo there of some kind…”), feels at points like filler despite its hypnotic groove and instrumental build up.

The album’s two full-on rock moments occur with “International Bullet Proof Talent,” which entertains in spite of its rather cheesy hook, and “Black Stone Heart,” another of the album’s highpoints. Playfully whistling its solo sections and ending with toy-sounding piano notes, “Black Stone Heart” seems to be the moment where the band feels like they’re having a good time playing. “Zikir,” the grand finale of the album, mesmerizes for a few minutes and slowly fades into the abyss. And apparently, the band fades out as well.

I do have to wonder why they bothered throwing a new record together if they weren’t going to continue on as a band, but I’m glad they did. I won’t say that my faith in comebacks has been completely renewed, (after all, those Stooges wounds cut deep), but at least Bauhaus came up with a pleasant enough surprise and a really good album.