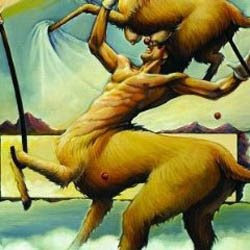 Maybe a month ago, I was reminded of how dead Punk rock really is. It happens very often these days that I witness SOMETHING that makes my insides liquefy, rise past the uvula and pour out of my mouth. It splatters. With what’s left of my strength, (at this point I’m lying in a boneless, contorted mass of skin and muscle), I’ll manage to acknowledge the steaming puddles I’ve spewed and note, “Hmmm…hopeless longing with a smattering of exhaustive rage.”

VH-1 was doing one of their decade round-ups, an 8-part series on the new millennium because they evidently couldn’t wait until the decade was actually complete. They got to 2002 and the topic of Avril Lavigne came up. The “expert” panel they hired for sometimes-amusing-but-mostly-mediocre commentary had no qualms whatsoever with talking about how refreshing and punk rawk she was and I wanted to crawl into the TV and beat the shit out of them all. Labeling her the anti-Britney, (what a complete misnomer that is), it didn’t seem fathomable that anyone with the physical capability of taking in air, expelling air, taking in air, expelling air, could make such a stupid and WRONG observation about Avril Lavigne and her non-existent contribution to American Hardcore or Punk Rock in general. I figured the fact that she didn’t know David Bowie sort of spoke volumes. Apparently, it didn’t.

It was, in my mind, yet another testament as to why Punk should be laid to rest, attainable only through its spit-covered and lack-lustrious (yes, I made up a word) past, meant to inspire and NEVER to be fully assumed by anyone ever again. Leave the safety pins and leather jackets alone.

This is understood by SOME bands. Not many, but some. I felt last year, despite Against Me! undeservedly grabbing all the headlines, it was Pissed Jeans that took the artform and kicked some integrity back into its saddened and criminally brutalized little heart by adding some Hard Rock riffage to the mix and bringing back Punk Rock’s right to be inalienably insane about whatever, mundane or pivotal. This year, the honors belong to Triclops!, an enlivened and enlightened bunch from San Francisco that have utilized some thick King Crimson progression and drowned the genre in a deep Pcylocibin bath. Jazzy, syncopated and heavy on the loopy, Fusion bass, Triclops! is a force to be reckoned with: a four-piece powerhouse with ample energy and their first LP, Out Of Africa, will send shivers down your spine.

Out Of Africa is a seven-song mind-F-U-C-K that persists in throwing curveball after curveball while instinctively keeping its mentality relatively agro. The STOMP! STOMP! CRASH! CRASH! of album opener “March Of The Half-Babies,” a sort of agonized situational wherein a drug-induced phantom keeps the narrator from jerking off, (at least, that’s what I think it’s about, though, the repetition of “Mommy” amidst guitar chaos and infant cries may have shot that theory all to hell), definitely sets a precedent: Loud and unusual.

The following track, “Iraqi Curator,” shows some shades of At The Drive-In in terms of vocal arrangement and some of the time signatures used:

Politics are big, as are the observations of “Freedom Tickler,” which discusses the excessive consumption and blind allegiance of the atypical American:

On the surface, “Freedom Tickler” is a blatant denouncement of where America stands currently, but its tone is mostly mournful even in spite of its sarcastic content and loud hook.

Be warned, this video might pull your lunch directly from your stomach.

The one song clocking in at less than 5 minutes, “Duende War (Out Of Africa),” is really the only instance where a song’s speed is consistent. Purely built on the licks of guitarist, Christian Beaulieu, “Duende War” is mostly spoken by Johnny No, who dispenses with the vocal effects that otherwise shroud his voice through most of the album. I guess it would be the album’s most accessible moment, as it is the track that takes the least amount of liberties with tempo and rhythm.

“Cassava,” an epic track if there ever was one, mixes noise riffs and surf guitar with storms of cymbal work and percussion. Not necessarily the band’s “Freebird,” not necessarily the band’s “In-A-Gadda-Da-Vida,” (after all, we are talking about Psychedelic influences here), “Cassava” is a furious and elbow-breaking summary of what Triclops! is capable of musically and the whirlwind with which all these elements come together is stunning.

The following track, “Secret 93,” is basically exercise for drummer, Phil Becker, as he just doesn’t stop for most of the song. Acting mostly as a riff-driven spoken word, the aural assault is interrupted midway for a carnival interlude that brings the song to a violent build up before it ends quietly.

Closing track, “Lovesong For The Botfly,” is an artistically licensed, albeit graphic, tale of the botfly’s survival, and how its species continue to flourish:

”…Just one mother more/A giant fleshy house for you, beautiful/Carve out your burrow, little guy/Maybe behind an ear, covered with brown crust and tasty infected mammal sores…”

The music itself, rhythmically sound with a humming bass line and syncopated drum beat, is loud and proud for the song’s mission statement and then wanders elsewhere, becoming solemn for what ultimately becomes its one profound observation:

Honestly, before this song I’d never even heard of the botfly, so my entomological knowledge is evidently beneath these guys. For the band however, at least for singer, Johnny No, the botfly is an envied specimen, as it needs nothing in terms of feelings, love or support. All it needs is food and an unsuspecting host. 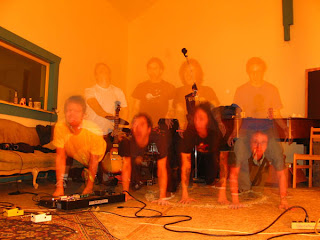 Be happy that a band wants you to feel something and maybe be a little pissed off. There’s nothing complacent or apathetic going on with what you hear in Out Of Africa. Its point-of-view is interestingly cryptic and raw; the music has balls and knows what to with them. It’s worth pointing out that a Punk band typically, in the past anyway, rejects musicianship. That was the whole point during Punk’s genesis: it was an argument against arena rock, disco, prog…it was the collapse of an artistic peek that allowed music to build from nothing and start anew. Triclops! doesn’t seem interested in building from nothing, but they’re obviously into refurbishing a grand idea, maybe to the point of insulting the Punk pathos. Does it make sense that something this well crafted belong in the Punk pantheon while legions of imitators with barely half the musical wherewithal (ahem…Avril) so blaringly pronounce themselves genuine? If it means coming up with something new to keep a spirit alive, so be it.

Anonymous said…
Stopping by to show some love to a fellow music lover. I admire and am inspired by lovers of music...especially those willing to step outside the mainstream and remain true to themselves. Stop by and visit sometime.

Much respect to you and best regards,

Anonymous said…
Lets not forget about Good Charlotte and how they love to slap on punk clothes and pass off their extra mediocre brand of pop as punk
8/29/2008 3:50 PM

Anonymous said…
This review is SO right on! I picked up Out Of Africa just recently and there's not a better heavy punk record out there this year. So trippppy!
9/02/2008 5:44 AM

Thanks for commenting and thanks for your efforts in promoting under-appreciated and under-exposed music. Keep on getting the word out.

Yeah, Good Charlotte's existence is laughable and blasphemous and they've definitely gone the extra mile to get as much mileage out of their clothes as they possible can. Weak music. REAL weak.

Thanks for reading the review and I'm happy to get an "AMEN!" on the album. Out Of Africa is definitely one of the best things I've heard this year. I really can't say enough good things about it.

Anonymous said…
My name is Amy Rollins and i would like to show you my personal experience with Adderall.

I have taken for 1 years. I am 20 years old. I have better luck with Adderall 20MG non-extended release than I do with Adderall XR 10MG, which is what I am prescribed. The XR wears off before the day is over, which leaves you with an awful crash to deal with. (Obviously, if you'd like to sleep regularly you shouldn't take another...so crashing off this particular dosage is almost inevitable.) They say you should drink caffeine towards the end of the day to try to ward off the symptoms of coming down off this drug.

Side Effects :
loss of appetite,dry mouth,insomnia,bad crash after about 7 hours,fidgety,rapid heartbeat,more productive,if taken for months regularly I start to feel less like myself,lower sex drive.