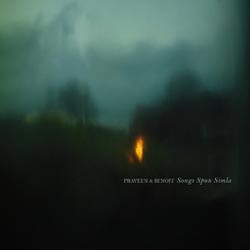 Interesting that Brian Eno and David Byrne decide to realign themselves with all that’s electric and beautiful once again after years of dormancy. At the same time, Electronica musician, Praveen Sharma, and singer/pianist, Thomas Meluch (aka Benoît Pioulard), deliver something along the same vein: A soft and mesmerizing collection of vocal chants over ethereal sounds and unpolished percussion.

I’m not always drawn toward Electronica, mostly because its static lack of character usually fails to carve any distinguishing or memorable aspects with which to hold the guilty artist, (or offender in many cases). Every once in a while though, the genre puts forth something interesting, something that conveys an idea, a mood, a time and place…a state of being. Even though there’s no blood that surges along with the electricity, Praveen & Benoît capture some poignancy through the medium, though it helps that there’s singing involved. Instrumentation helps, too.

Song Spun Simla, their six-song collaboration, was apparently created over the course of two years without much in terms of physical interaction. Basing its name on Praveen’s ancestral point of origin, a village in India, Song Spun Simla doesn’t feel like it comes from only one place. It’s incorporation of myriad instruments and noisemakers give it an existentially united feel. The slice-of-life exchanges that precede the accordion played intro, “The Tunnel Is Still There,” seem to mix languages, creating this anyone/anyworld/anywhere landscape. I don’t think it’s too dramatic to say that it almost stakes its claim on its own uncharted piece of land.

“Death As A Man,” which begins as a ringing cloud of multiple chimes, winding whistles and perpetual pings, interestingly maintains a chaotic overlay of effects over a consistent rhythm base of acoustic guitar and a brushed snare. Benoît, as a vocalist, does remind me of David Byrne to an extent in terms of his light tone and his ability to sound somewhat heavenly, for lack of better term. It’s an aesthetic he carries throughout the album.

“To Scale,” a mostly percussive arrangement, may be the album’s gem. Being the only instrumental, Praveen amasses a layered selection of aural effects and drumming sounds that seem to fall and echo out of sync at points and then, somehow, get back on track without any hint of catch-up. It could just be that the elements get overwhelmingly complex at points, but the arrangements and sound collage herein are the type of thing that makes one thankful for headphones.

And then, something like “Embers” acts largely as a vocal arrangement. Praveen’s penchant for layered percussion doesn’t receive less of a spotlight, but Benoît does compete for attention. “1991” sounds like one dreary, dark and orchestral year and the climactic “Chiaroscuro” adds a large dose of distortion what begins as a pretty acoustic track.

Overall, Song Spun Simla is a mostly ambient piece of melancholic gorgeousness and its use of traditional instruments in an Electronic setting is interestingly executed. It’ll catch your ear; maybe make you meditate a little bit. Enjoy.