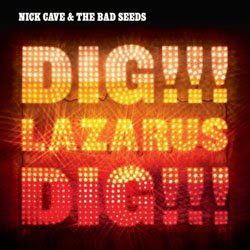 As of this writing, Nick Cave is almost 51. Having said that, when you listen to something like Dig!!! Lazarus, Dig!!!, you realize that Cave is more of a performance artist than a frontman these days, expounding heavily into a microphone with adult-themed fireside tales, or reporting with a flamboyant flair for the dramatic that brings relevance to the most minute of details. You also realize that the Bad Seeds, this being their fourteenth album in their twenty-four year existence, are still a musically complex outfit that has grown wiser with its audience.

Basing its title track upon the miracle that probably gave George Romero the inspiration he needed to gain his fortune and fame, Lazarus (“Larry”) stars as a malcontent, unhappy with the fact that he was brought back to the land of the living. Cave casts Larry as a would-be celebrity whose rise and fall from glory ends by ultimately repeating his physical demise. And Cave tells the story with such exaggerated poise you almost wish every news reporter got this much joy out of relaying information. Cave, in this instance, is playing paparazzi, but he’s a much better writer.

Dig!!! Lazarus, Dig!!!, the Bad Seeds’ first album since 2004’s Abattoir Blues/The Lyre of Orpheus, follows the emergence of Cave’s Grinderman project, which garnered high marks from music fans and critics last year. With Grinderman acting as more of a vehicle for seeming want of raw rock n’ roll, the Bad Seeds do seem lighter, less amplified and more introspective. Hearing the backdrop for the title track, there’s a remarkably jollity that interestingly, and ironically, coincides with the otherwise not-so-happy tale Cave tells. In past albums, even with an air of irony or black humor, the tone might’ve been a little different. It’s possible that Grinderman has become the new outlet for vitriol, leaving the Bad Seeds with more of an opportunity to expand on their sound. Or, this is just a natural progression for them.

“Night Of The Lotus Eaters,” which comes off like a Suicide track with depth, features Cave in off-rhythm narration over an instrumental loop that is broken up here and there by drum sounds and howling feedback. ”Get ready to shield yourself,” he warns over eerie bursts of echoing strings. Simple, but effective.

“Albert Goes West” goes a little Dinosaur Jr., throwing a little more feedback into the mix before “We Call Upon The Author,” an intellectually charged series of observations and questions for the Big Guy, (“God” for all you atheists out there), throws out priceless lines like,”Bukowski was a jerk/Berryman was best/He wrote like wet papier mache/huh-uh and then he went the Heming-way…”.

In the midst of all the intellectual inquisitions and literate journalism, “Hold On To Yourself” and “Jesus Of The Moon,” lighten the cerebral load a bit for some emotional and engaging storytelling. “Jesus Of The Moon,” a rather red-eyed and somber account of a break-up told overtop some saloon piano and weeping violin, allows Cave to deliver this gem, ”…‘Cause people often talk about being scared of change/But for me I'm more afraid of things staying the same/'Cause the game is never won/By standing in any one place/For too long.”

The bluesy mood of “Hold On To Yourself” and “Jesus Of The Moon” sandwiches straight-ahead rocker, “Lie Down Here (& Be My Girl),” and then is followed up by the church organ whine and steel drum flurry of “The Midnight Man.” “More News From Nowhere,” a soft and appealing closer, goes on a little too long but ends the album nicely.

Professor Cave and Co. basically get the award for “Smartest Album,” but Dig!!! Lazarus, Dig!!! also benefits from a perfectly honed and eclectic mixture of music, layers of arranged sounds that cultivate the tonality before Cave’s even begun talking. And, it’s more than realized that this is the primary function of every band, to create the mood and enhance the song’s content. But, realize that, after twenty-four years, the Bad Seeds haven’t completely run out of ideas. In “More News From Nowhere,” Cave asks,”Don't it make you feel so sad, don't the blood rush to your feet/To think that everything you do today, tomorrow is obsolete?” I think they would be happy to know that this hasn’t happened to them yet.