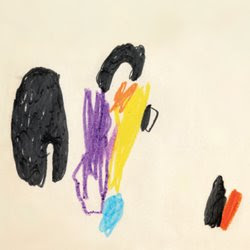 These Are Powers
Taro Tarot EP
Hoss Records
(out of print, being reissued by Dead Oceans, 10.17.08)
Originally released: 4.1.08

These Are Powers released two albums on Hoss Records earlier this year: Terrific Seasons and the Taro Tarot EP. Both these albums are being reissued as the band has signed with the Dead Oceans label, so neither are available at this time unless you want to find a copy on E-Bay or see what they’re going for over on Gemm.com. I can’t speak of the LP, but I can tell you that the Taro Tarot EP will be worth the wait.

These Are Powers, a trio comprised of ex-Liars Pat Noecker, Anna Barie and Bill Salas (who otherwise makes wikkee-wikkee scratch beats under the name Brenmar), is a well-oiled and precise machinelike force of No Wave cacophony and Industrial demolition. Taro Tarot offers up six tracks that encompass atmospheric drum-circle testimonial (“All Night Service”), undulating and thick beasts of low end burden (“Chipping Ice”), and even moments where Enya collides with Lydia Lunch (“Cockles”).

Possibly more rehearsed and arranged then anything you may have heard from No Wave era NYC, (please, if you haven’t, score yourself a copy of the Brian Eno compilation, No New York) These Are Powers seem to embody the offbeat, artistic and chaotically conceived spirit that bands like DNA or Teenage Jesus and the Jerks brought to the table thirty years ago, but they couple that with the accuracy of a program, or the perpetual motion of a swinging pendulum. 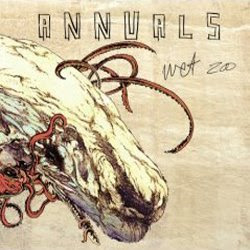 So, concept: Basically, Annuals and Sunfold are the same band. One just has a little more estrogen.

Adam Baker, mastermind behind the Sunfold spin-off, (Sunfold was originally called, Sedona, a name that was abandoned due to a legal issue...thanks, Google), provides another sound-alike in the already overflowing Indie folkster cup for all the whine-tasters out there. Beginning with the successively increasing passion of “Sore,” and following that with Smiths/Rusted Root-lifted “Around Your Neck,” it becomes obvious that THE TEMPLATE is being utilized. “Just Stay In” at least makes a couple interesting decisions with bowed instruments and sounds not so directly Nick Drake, not so exactly Elliot Smith, not so INSERT FAVORITE INDIE SAD ROCKER HERE.

The Sunfold tracks, beginning with the Pinback flavored “Between The Worlds” sort of prove to be more engaging and thought out. “Watering Pail,” J. Robbins/Jawbox in full effect, works in some Dischord-based emo before the band calls it quits.

It’s an interesting concept but Baker needs to come up with his own material.

EDIT: Glaring mistake on my part. Sunfold is led by Kenny Florence so all songwriting credits go to him, as do the excessive rotations of Pinback and Jawbox LPs. Adam Baker is the drummer for this line-up. Very sorry for the error.
ep folk indie no wave out of print post-punk